Rumors suggest an updated MacBook Air could be launching sooner rather than later, and we've already seen certifications for a possible ‌MacBook Air‌ battery recently filed in China and Denmark. Now the same battery has appeared on Safety Korea Certification, along with an image of the battery that strongly suggests it's for a new ‌MacBook Air‌ model (via 91mobiles). 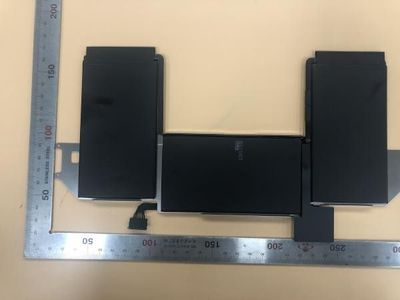 The current ‌MacBook Air‌ has a 49.9Wh battery, which is matched in this new model type (A2389) featuring a 4380mAh capacity. The model number A1965 has been used in the last few ‌‌MacBook Air‌‌ generations.

We're still none the wiser about exactly when a new ‌MacBook Air‌ might launch, because regulatory bodies sometimes approve and test new hardware months before a new product comes out. However, several rumors have suggested that the ‌‌MacBook Air‌‌ will be one of the first Macs to get an Apple Silicon chip, and the new Arm-based machine could come before the end of 2020.

Apple has confirmed that it will be transitioning to its own custom ‌Apple Silicon‌ processors, and said we can expect new Arm-based Macs before the end of the year, but it didn't give away which Mac model would be the first Apple Silicon-powered machine.

Apple already updated the ‌MacBook Air‌ in March 2020 with more internal storage, 10th-generation Intel processors, and a more reliable scissor-switch keyboard, but it's not out of the question that a second update could come this year given the swap to ‌‌Apple Silicon‌‌ chips.

In addition to performance benefits, ‌Apple Silicon‌‌ chips are expected to be much more power efficient than the current Intel chips used in the ‌‌MacBook Air‌‌ lineup. That could see the same 49.9Wh battery improve upon the current ‌MacBook Air‌'s 11 hours of battery life when browsing the web and up to 12 hours when using the Apple TV app for watching movies.

For more on what we're expecting for the next ‌‌MacBook Air‌‌, check out our MacBook Air roundup, and for details on Apple's transition to ‌‌Apple Silicon‌‌ chips, read our in-depth guide.

eye contact
Really happy to see that the new MacBook air's will have batteries. it should make them really portable
Score: 12 Votes (Like | Disagree)

MayaTlab
Just an observation : the plastic part that’s near the fan on current MBAs is quite different and doesn’t follow the arc shape of the current fan housing. Could either mean that the fan design has changed or that there’s none. I’m quite surprised however about what would take the place of the fan if it’s removed because apparently that is not for additional battery capacity and probably not a larger motherboard. Better speakers ?
Score: 5 Votes (Like | Disagree)

svenning
I am from Denmark and can confirm these rumors...

Ps. I really can’t. But I’m excited to see an ARM MacBook Air (probably won’t be a massive powerhouse but hopefully give a hint on what a MacBook Pro can offer in the future)
Score: 4 Votes (Like | Disagree)

It would actually seem really unexpected to me if the first Arm Macs have the same enclosures as the intel ones they are replacing. It would be strange if they have the same battery size unless apple are happy to box themselves in to offering either huge increases in performance or battery life whilst not changing how their machines look. I'd expect them to target improving all three so that they can claim "best battery life, fastest ever laptop and thinnest case in class" or something like that.

Maybe we are looking at the MacBook Pro 13" being an evolution of the MacBook Air. Perhaps everything is going to take a step down in thickness. With the air adopting something similar to the MacBook chassis.

I’m not sure why people continue to say the design has to change with Apple silicon, that’s not necessarily true. Most of the Intel machines changed very little during the Intel transition. I’m not saying a redesign is unlikely, it does make sense. But, Apple has been planning this transition for a while, it’s not impossible that the current MacBook Air was designed with both Intel and Apple silicon in mind.
Score: 3 Votes (Like | Disagree)

as long as it will be able to run Terminal and SSH, Safari and mail, i am sold.
Score: 2 Votes (Like | Disagree)
Read All Comments