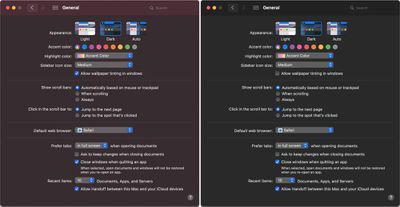 For those who have Dark Mode enabled, turning off wallpaper tinting can make windows on the Mac noticeably darker, especially when a lighter color background is in use.

Apple introduced the wallpaper tinting feature in an earlier version of macOS, and some Mac users who prefer ‌Dark Mode‌ have been hoping for a toggle to disable it. Prior to now, there was a method for turning it off, but it involved enabling the graphite accent color.

With wallpaper tint on
As 9to5mac points out, being forced to choose graphite was not ideal because it eliminated many of the colored elements of the operating system. With macOS Big Sur, wallpaper tinting can be disabled while leaving the rest of the interface untouched.

With wallpaper tint off
Disabling wallpaper tinting will only make a difference to those who use ‌Dark Mode‌, as it does not change the way that windows look in Light Mode. It's small but subtle change that some ‌Dark Mode‌ users will appreciate, and it only applies to windows, and not other elements of the interface like side bars.

The feature can be accessed by opening System Preferences, selecting General, and then clicking on the toggle that says "Allow wallpaper tinting in windows."

Big Sur peeps, what's the difference between this and enabling 'Reduce Transparency'?

Reduce Transparency affects sidebars, immersive toolbars, and the menu bar and the dock, whereas tinting affects the material color of the windows themselves. Look at the side-by-side at the top of the article.
Score: 7 Votes (Like | Disagree)

icerabbit
We need this for light mode too!

Let me turn off the transparancy / translucence where my active window content changes willy nilly based on what is behind it.
Score: 5 Votes (Like | Disagree)

zorinlynx
When light mode is enabled, the menu bar on the top is still in dark mode.

Is this an intentional change or a bug? I already reported it, but haven't heard back and it's still unchanged in the latest beta.

I'm one of those rare unicorns known as a "Light mode user" and hate that the menu bar doesn't respect the setting anymore in Big Sur. :(
Score: 4 Votes (Like | Disagree)

Internet Enzyme
Wallpaper tinting has gotten really intense in Big Sur. I like it because it adds some whimsy, but whenever you add some whimsy you need an option to turn it off.
Score: 4 Votes (Like | Disagree)

now i see it
translucent windows and menus are always the first thing I disable on all of their OSes.
Score: 4 Votes (Like | Disagree)

There is. sudo softwareupdate -i -a --restart

You’re not funny. Somebody will actually take you seriously
Score: 3 Votes (Like | Disagree)
Read All Comments