Apple Maps Gains Look Around in Some Japanese Cities [Updated]

Look Around, an Apple Maps feature introduced in iOS 13, has today rolled out in some cities in Japan, allowing for a close-up street-level view of various locations and landmarks. Look Around is available in Tokyo, Osaka, Kyoto, and Nagoya. 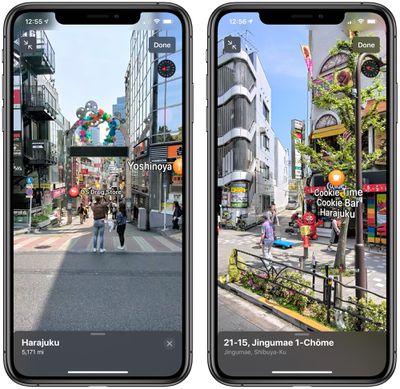 The new feature was noticed by Ata Distance, who also says some areas like Yoyogi Park and Meiji Shrine now feature the ‌Apple Maps‌ 2.0 data with more information.

Apple introduced Look Around with iOS 13, but it has been limited to a handful of cities like Boston, Chicago, Houston, Las Vegas, New York, Los Angeles, San Francisco, and more.

Apple is slowly introducing Look Around in more cities, with a list of where Look Around can be found available on Apple's website. Note that Tokyo, Nagoya, Kyoto, and Osaka have not yet been added to the list.

Update: Justin O'Beirne, who often shares details on updates made in ‌Apple Maps‌, took a look at the new map updates in Japan, which show new detail added to ‌Apple Maps‌ across the country.

The blog post features before and after shots that give a clear picture of how ‌Apple Maps‌ changed, better highlighting parks, trees, landmarks, waterways, walking paths, and more. It's well worth checking out if you want to see the difference.

Gross! That stuff is full of sugar and salt. It's about the worst fast food you can get in Japan.
Sure it's the food of drunken salarymen, but they don't know any better!

Ramen on the other hand...

Gross! That stuff is full of sugar and salt. It's about the worst fast food you can get in Japan.
Sure it's the food of drunken salarymen, but they don't know any better!

If the article refers to a page on Apple's website, a direct link would be handy.

There is a page but it doesn't seem to have been updated to reflect the new areas yet: https://www.apple.com/ios/feature-availability/#maps-look-around
Score: 1 Votes (Like | Disagree)

Dagnabbit! How about finishing California before going everywhere else?

Apple Maps is already miles ahead in the US compared to the rest of the world. It was the same for Google Maps for a while but they have made a concerted effort to improve.

It's great to see them focusing on a market outside of their home market, especially one like Japan with high smartphone adoption and a high iOS market share. If they want to have better usage numbers and trust of their service, they need to improve their service globally, not just at home.

Also they can work on improving more than one location at a time.
Score: 1 Votes (Like | Disagree)
Read All Comments