Apple's upcoming iPhone 12 models could ship with a new Lightning to USB-C cable that includes a braided fabric design, according to leaked photos from ChargerLAB that surfaced on Weibo today (via Twitter users DuanRui and L0vetodream). 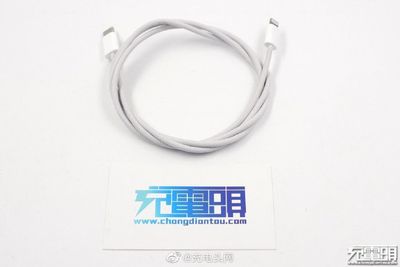 Braided cable designs have the potential to be more durable than standard rubber-coated cables, but typically extra reinforcement is included at the end points where the cable heads are positioned, which isn't seen here. The cables look similar to existing Apple-designed Lightning to USB-C cables with the exception of the new gray and white braided look.

ChargerLAB, where the leak originated, has shared accurate information on Apple's cable plans in the past and says that the cable depicted here may come standard with Apple's ‌iPhone 12‌ lineup. Apple in 2019 included a USB-C to Lightning cable with the higher-end Pro iPhone models to go along with a USB-C power adapter, while the more affordable iPhone 11 came with a standard USB-A to Lightning cable.

Use the POWER-Z MF001 MFi tester to read the internal information of the Lightning terminal. From the screen, you can see that the wire ASIC and PMU are original, the terminal model is C94, and the score reaches 100 points. It is an Apple MFi certified original terminal.

Apple's USB-C to Lightning cables are used to enable fast charging in compatible iPhones, providing a 50 percent charge within 30 minutes. The cable was able to fast charge an ‌iPhone‌ and an iPad according to ChargerLAB.

In addition to providing fast PD charging for the iPhone, the iPad is also okay. The test charging power for the iPad Air3 reached 15.02V 2.17A 32.72W, which reached the maximum power of the iPad Air3.

Along with a braided design, the new cables appear to feature 8 silver contacts with rhodium-plated ruthenium, which is more resistant to corrosion, and combined with the braided design, these cables are likely to be able to better withstand damage after prolonged use. A more durable design will be a welcome change for ‌iPhone‌ users as there have been many complaints over the years about the weak design of Apple's cables.

Apple's new braided USB-C to Lightning cable may be the only accessory that ships with its 2020 iPhones. Multiple rumors have suggested the ‌iPhone 12‌ models will not come with a power adapter or EarPods in the box, allowing Apple to save money and cut down on packaging.

Instead, Apple may sell a new 20W power adapter on a standalone basis, allowing customers to purchase a power adapter separately from Apple or from a third-party manufacturer.

itsmilo
Lightning to usb-C because „everyone already has plenty of iPhone chargers“ yet those wouldn’t work with this cable. Hmmm ?
Score: 33 Votes (Like | Disagree)

larrylaffer
And nothing to plug it into.
Score: 24 Votes (Like | Disagree)

fumi2014
So basically what Anker has supplied for a few years now. No doubt Apple will claim that their way of designing a braided cable will be revolutionary.

"We saw other companies make these cables. Apple wanted to wait until we could do it properly."
Score: 19 Votes (Like | Disagree)

ruka.snow
Lighting is a no sale at this point. While it is nice they are including a potentially higher quality cable, there is no upgrade there until it is a type-c connector. I'll stick to my X until lightning is dropped and there is a major change to the screen.
Score: 11 Votes (Like | Disagree)

primarycolors
A braided cable would be a huuuge win for durability, since their regular cables have had durability problems for years.

I'm concerned about the cable being USB-C without including a power brick, though. I totally know the future is USB-C, but the push to eliminate the brick was largely because many people have older bricks they can reuse and eliminating them from the 12 would thus reduce waste. But unless you bought an iPhone 11 Pro/Max, the bricks and computer ports most people have are USB-A, making you need a new brick to use the cable...

In my opinion, they should ship iPhones with USB-C and a wall brick for a few years, and then eliminate the wall brick.
Score: 10 Votes (Like | Disagree)
Read All Comments