Leaker L0vetodream this morning posted a tweet corroborating recent rumors that Apple's "iPhone 12" lineup won't come with EarPods or a charger in the box, adding that this will also eventually apply to the existing second-generation iPhone SE. 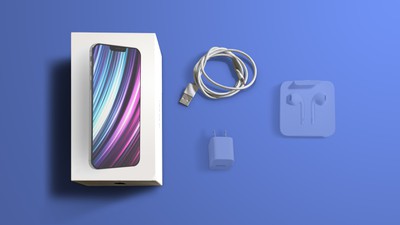 L0vetodream also claims that future iPhone packaging will be "thinner" and "exquisite," which would make sense if Apple's handsets are set to come in lieu of a bulky power adapter and EarPods case. Apple is already renowned for its svelte, economical packaging, and slimming down its ‌iPhone‌ boxes would cut down on waste and shipping costs.

The lack of a charger and EarPods lines up with predictions made by Apple analyst Ming-Chi Kuo and analysts at Barclays last week. Apple is expected to release a separate new 20W power adapter as an optional accessory for iPhones and end production of its existing 5W and 18W power adapters later this year.

in my dream, the new IPhone will not come with the charger and earphone , this even applying to SE2. The new packaging box become thinner, and Exquisite. — 有没有搞措 (@L0vetodream) July 1, 2020

The form factor of the new 20W power adapter is said to be similar to the 18W version, with USB-C Power Delivery for fast charging. Kuo also expects that Apple will stop including a 5W power adapter with the current second-generation ‌iPhone SE‌ later this year.

Barclays still expects Apple to include a Lightning to USB-C cable in the box as the only accessory included with the "‌iPhone 12‌," which is expected to come in four models: One new 5.4-inch device, two 6.1-inch models, and one 6.7-inch handset.

Rumors suggest the 6.7-inch ‌‌iPhone‌‌ and one 6.1-inch model will be higher-end OLED devices with triple-lens cameras, while the 5.4 and 6.1-inch models will be lower-end iPhones with dual-lens cameras and a more affordable price tag.

dapa0s
I really hope they don't go for the words "exquisite thinner box" when they're announcing it on stage.
Score: 42 Votes (Like | Disagree)

*ignoring the fact that it will come without charger or earphones, saving them some extra bugs, probably even on distrubtion

As an alternative they will present some pretty charts showing how many people have already a lot of chargers at home and that Apple does it's best to be environmental, by giving customers, who still need one, the opportunity, to purchase the incredible new charger individually at only "xy dollars"
Score: 24 Votes (Like | Disagree)

Forti
It's hard for me to belive it.

I have and iPhone 7, so I have power brick.. but 5W. So with new iPhone I have to either buy one 18/20W from apple or one from third party company.

tann
I think the right way to do this properly is to offer either a discount on a charger within say x weeks of buying a new phone, or straight up offering chargers for a very low price. So it's not as big a slap as you first think.

It just hurts those moving to Apple for the first time, when they are the people you want to deliver the "wow" to!
Score: 17 Votes (Like | Disagree)

foobarbaz
I'm all for avoiding extra junk. I have like three unused Lightning earpods, and nobody wants them because everybody has AirPods and they don'tt work with other devices.

The best solution would be to include a coupon to pick either a free charger or like 5$ App Store credit. Of course that doesn't sound like Apple. ;) But it would reduce waste a lot. Plenty people have enough chargers.
Score: 17 Votes (Like | Disagree)

Abazigal
Would be ironic if the cost savings from removing the accessories went to cover the costs of redesigning the packaging.
Score: 13 Votes (Like | Disagree)
Read All Comments

Tuesday May 11, 2021 5:06 am PDT by Hartley Charlton
Apple's next MacBook Air will feature a completely new design and come in a range of colors like the 24-inch iMac, according to leaker Jon Prosser, who has now released supposedly accurate renders of the new machines based on leaked images. In a new video uploaded to YouTube channel Front Page Tech, Prosser elaborated on his previous prediction that Apple's next-generation MacBook Air models ...
Read Full Article • 68 comments

Sunday May 9, 2021 2:00 am PDT by Sami Fathi
Zoom, a hallmark platform used by millions during the global health crisis, has been given access to a special iPadOS API that allows the app to use the iPad camera while the app is in use in Split View multitasking mode. This case of special treatment was first brought to attention by app developer Jeremy Provost, who, in a blog post, explains that Zoom uses a special API that allows the...
Read Full Article • 366 comments

Tuesday May 11, 2021 11:56 am PDT by Joe Rossignol
Last month, Apple introduced a new iPad Pro with the same M1 chip found in the latest Macs, and early benchmark results indicate that the M1 iPad Pro is over 50% faster than the previous-generation iPad Pro. Based on five legitimate Geekbench 5 results (here's the fifth) for the fifth-generation 12.9-inch iPad Pro with the M1 chip, the device has average single-core and multi-core scores of...
Read Full Article • 225 comments