The New York Times today announced that it is pulling out of Apple News, as the service does not "align with its strategy of building direct relationships with paying readers." 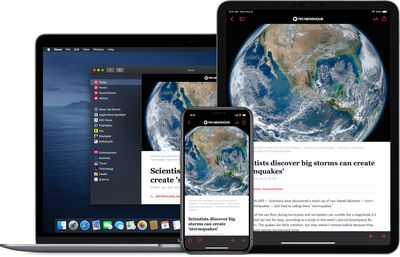 Starting today, articles from The New York Times will no longer show up in the ‌Apple News‌ app. The news site says that Apple has given it "little in the way of direct relationships with readers" and "little control over the business." Rather than allowing its articles on ‌Apple News‌, The New York Times wants to drive readers to its own website and app.

"Core to a healthy model between The Times and the platforms is a direct path for sending those readers back into our environments, where we control the presentation of our report, the relationships with our readers, and the nature of our business rules," Meredith Kopit Levien, chief operating officer, wrote in a memo to employees. "Our relationship with Apple News does not fit within these parameters."

In a statement, an Apple spokesperson said that The New York Times only provided a few ‌Apple News‌ stories a day and that ‌Apple News‌ will still provide readers with trusted information from thousands of other publishers. "We are also committed to supporting quality journalism through the proven business models of advertising, subscriptions, and commerce," said the spokesperson.

The New York Times has more than six million subscribers and has seen increasing revenue from digital subscriptions on its site. The New York Times does not expect exiting ‌Apple News‌ to have a "material impact" on its business, and the company will continue to work with Apple on apps and podcasts.

PJWilkin
I always found the quality of the NYT articles poor

Given some of the recent decisions by the NYT I won’t miss them
Score: 45 Votes (Like | Disagree)

really???
I certainly wouldn't call them a good source for the news anyway. ... Buh bye
Score: 44 Votes (Like | Disagree)

macduke
Apple needs to focus. They are all over the place.
Score: 38 Votes (Like | Disagree)

anshuvorty
Not surprised...Apple News, just from the beginning seemed like it wouldn't work out. At least Apple tried, I will give them that.
Score: 33 Votes (Like | Disagree)

Friday May 20, 2022 6:50 am PDT by Joe Rossignol
Earlier this week, The Information's Wayne Ma outlined struggles that Apple has faced during the development of its long-rumored AR/VR headset. Now, in a follow-up report, he has shared several additional details about the wearable device. Apple headset render created by Ian Zelbo based on The Information reporting For starters, one of the headset's marquee features is said to be lifelike...
Read Full Article • 131 comments