Opera has become the "first web browser to integrate Twitter," according to its developers. In Opera 69, released today, the social media platform now appears directly in the app's sidebar. 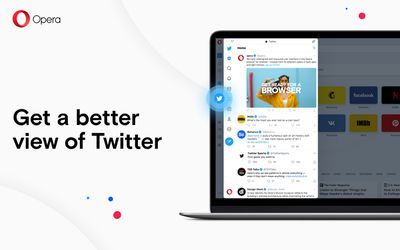 The use of a keyboard and a large display makes tweeting or sending direct messages more convenient. Using Twitter directly in the browser's sidebar is also more convenient than picking up your smartphone or opening a special client app on your PC, especially when it's breaking news you want to follow. The sidebar integration makes it easier to find Twitter whenever it's needed.

The optional integration follows the recent addition of Instagram in Opera's sidbar, where WhatsApp and Facebook Messenger can also live.

The newest version of Opera also includes a new weather widget on the start page, an improved visual tab cycler, and improvements to Workspaces, which allows users to group tabs according to the context they use them in.

numberfour
I don't see more bloat as a positive
Score: 12 Votes (Like | Disagree)

ReallyRod
Why would anyone think this was of benefit? Twitter/social media in general is mostly just a toxic cesspit.
Score: 10 Votes (Like | Disagree)

RUQRU
Opera has become the "first web browser to integrate Twitter," immediately rendering it useless. No!
Score: 6 Votes (Like | Disagree)

This is the reason I ditched Opera when they sold it to CCP (aka China Communist Party). Anything that is CCP owned software or apps are HARD NO for me. Example: Zoom, TikTok, etc.
Score: 4 Votes (Like | Disagree)
Read All Comments