iOS 14 is better about letting you know when your iPhone accessories are charged or need charging, and there is a new feature that sends a notification when a connected Apple Watch has finished charging. 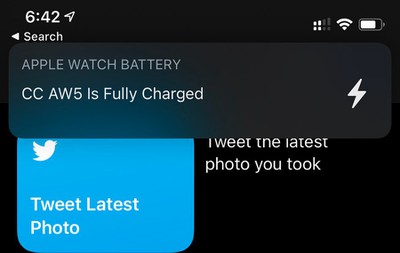 The Apple Watch can't be charged while it's worn at night, of course, so after waking up, it will need to be placed on the charger if the battery is getting low. The notification feature will let users pull their Apple Watches off the charger as soon as charging is finished to go about their day.

Apple doesn't list the Apple Watch charging notification feature on its website, but it does highlight one other battery life notification for AirPods. When the ‌AirPods‌ battery begins to run low, iOS users will receive a notification letting them know that it's about time to charge.

There are dozens of other smaller features and tweaks in ‌iOS 14‌, and we've got a list of everything interesting that we've found so far in our tidbits article.

tranceking26
Awesome. Now can I have one that tells me when the iPhone is fully charged too.
Score: 14 Votes (Like | Disagree)

tgwaste
And yet 5 series later and with 1.5 trillion dollars my watch still wont tell me the battery percentage of my iphone.
It's unbelievable.
Score: 8 Votes (Like | Disagree)

And yet 5 series later and with 1.5 trillion dollars my watch still wont tell me the battery percentage of my iphone.
It's unbelievable.

There is an app called Juice Watch, that will do what you want. It works well. I use it on my series 5.
Score: 4 Votes (Like | Disagree)

MrGimper
Would like the battery widget on the phone to tell me my MacBooks charge level.
Score: 4 Votes (Like | Disagree)