As Apple prepares to unveil its next-generation version of iOS, iOS 14, new iOS installation numbers indicate that iOS 13, the current update, is installed on 92 percent of all iPhones introduced in the last four years. 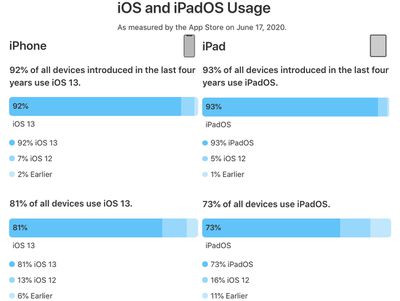 As for the iPad, 93 percent of all iPads introduced in the last four years run iPadOS, while five percent run iOS 12 and just one percent run an earlier version of iOS.

Apple hasn't released updated iOS installation numbers since January, and over the course of the last several months, many more people have upgraded to the iOS 13 operating system.

Apple will introduce iOS 14 on Monday, June 22 at its WWDC keynote, with the update set to be released in the fall alongside new iPhones. As work picks up on iOS 14, Apple will focus less on iOS 13 in order to add features and fixes to the new update.

Yeah it’s pretty ridiculous to call this any sort of accomplishment by Apple. Most people either have auto-updates turned on by default, or they manually update simply because their phone told them to.

It’s not like most people sit there and think, “Hm... I think Apple really knocked it out of the park with this latest update—I have to have it!”

The accomplishment is that the platform is designed for longevity, compared to competing platforms where the OS company is different from the device manufacturer and the responsibility for providing device updates is with each individual device manufacturer and devices are often obsolete after 2 years whereas in the Apple world, it's more like 5 years.

The real accomplishment from the Apple side isn't even the 92% of devices from the last 4 years. It's the 81% of all of their iPhones. Of course, this could mean that when an iPhone is declared obsolete, users upgrade and the device falls out of the pool of "active devices" that count towards this percentage.

But it also means that the platform is very up-to-date. For developers, this means that when making an App using the latest APIs, only available in iOS 13, I can reach more than 80% of the customers.

This is why, for example, when a company makes an App with AR support, they might not bother abut Android even though recent versions of Android added an AR framework and most people use Android Phones.

However, if you look at the number of active Android phones that support AR, compared to the number of iPhones that support AR, the tell a different story. This in combination with having to support a wider range of GPUs and spending way more money on testing (or, alternatively, delivering a sub-par product), makes iOS very attractive as a platform to develop for, even though similar features are available on Android. The platform isn't just about what the software and hardware theoretically supports. It's about installed user base as well.
Score: 30 Votes (Like | Disagree)

They nag you to death with daily reminders that requires multiple screen progression before you can go back to using the watch or phone or iPad. Nice to know that some people can still resist the 1984 approach that Apple takes to force "updates" which many times eliminate uses or possibilities. "Security" should not mean, you can't do this anymore.

Jim
They nag you to death with daily reminders that requires multiple screen progression before you can go back to using the watch or phone or iPad. Nice to know that some people can still resist the 1984 approach that Apple takes to force "updates" which many times eliminate uses or possibilities. "Security" should not mean, you can't do this anymore.
Score: 11 Votes (Like | Disagree)

Joniz
Hate that Apple removed —ignore update in their latest update of Mojave.

I7guy
Is there a way to spin this into some negative news?
Score: 9 Votes (Like | Disagree)

kanki1985
All these people fell into the harassment called software updates popup.
Score: 8 Votes (Like | Disagree)
Read All Comments

Sunday January 16, 2022 8:56 am PST by Sami Fathi
Continuing the tradition set with the iPhone 13 Pro, only the highest-end iPhone 14 models will feature Apple's ProMotion display technology, according to a respected display analyst. Ross Young, who on multiple occasions has detailed accurate information about Apple's future products, said in a tweet that ProMotion will not be expanded to the entire iPhone 14 lineup and will remain...
Read Full Article • 56 comments