iOS 13 is now installed on 77 percent of iPhones that were released in the last four years, according to updated adoption numbers that Apple shared today on its App Store support site for developers.

17 percent of iPhone owners with a device released in the last four years continue to run iOS 12, while 6 percent run an earlier version of iOS. 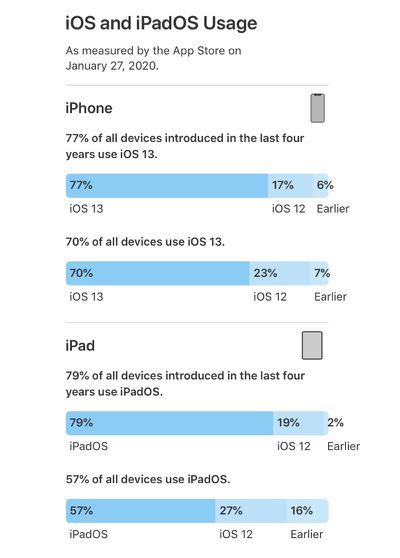 A total of 70 percent of all iOS devices run iOS 13, with this number taking into account older iPhones as well. 23 percent of total iPhones have iOS 12 installed, and 7 percent have an earlier version of iOS installed.

Apple is breaking down iOS 13 installation rates in a new way as of this latest update, providing details on both iOS and iPadOS.

According to the new numbers, 79 percent of all iPads introduced in the last four years are running iPadOS 13, 19 percent run iOS 12, and 2 percent use an earlier version of iOS.

When it comes to all iPads, including older models, 57 percent run iPadOS 13, 27 percent run iOS 12, and 16 percent run an earlier version of iOS, suggesting there are quite a lot of older iPads still in circulation, or people aren't updating iPads as often as iPhones.

Apple last shared updated iOS installation numbers in October, and at that time, 55 percent of all iOS devices from the last four years ran iOS 13, while 50 percent of all devices had the update. iOS 13 installation has grown quite a bit over the course of the last three months.

For comparison's sake, during early January 2019, iOS 12 was installed on 78 percent of all devices introduced in the last four years.

realtuner
Tried to check Android versions to compare, but Google hasn't updated their webpage since May 2019.

kingofwale
kudo to the 23% of people who had to click "no" every single day to auto update.
Score: 4 Votes (Like | Disagree)

now i see it
yeah, this metric is almost meaningless. I'd wager that 98.5% of iPhone users are clueless about tvOS profiles and the real hazard updating brings. They get nagged incessantly until eventually clicking the OK button stops the hectoring.
iOS updates get installed basically because they're jammed down our throats
Score: 3 Votes (Like | Disagree)

yeah, this metric is almost meaningless. I'd wager that 98.5% of iPhone users are clueless about tvOS profiles and the real hazard updating brings. They get nagged incessantly until eventually clicking the OK button stops the hectoring.
iOS updates get installed basically because they're jammed down our throats

The ‘clueless’ 98.5% who have the updates shoved down their throats do it and move on with their lives. The rest of us who are ‘discerning’ and independent eventually still do it anyway. We all get there somehow. So what the fuss?
Score: 3 Votes (Like | Disagree)
Read All Comments

Monday January 24, 2022 9:20 am PST by Juli Clover
AT&T today announced the launch of upgraded AT&T Fiber plans, which support speeds of up to 5 Gigabits for some customers. There are two separate plans, one "2 GIG" plan and one "5 GIG" plan, available to new and existing AT&T Fiber subscribers. According to AT&T, the new plans are available to nearly 5.2 million customers across 70 metro areas including Los Angeles, Atlanta, Chicago, San...
Read Full Article • 267 comments