Apple continues to work on an AirPower-like wireless charging mat that would be able to charge multiple devices at once, according to leaker Jon Prosser, who shared photos of an alleged prototype codenamed "C68" today. 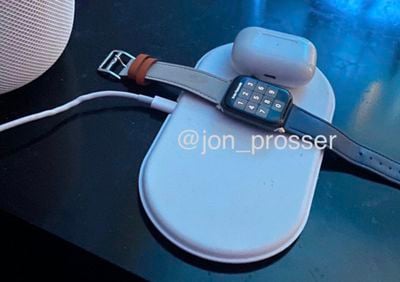 The mat shown in the photo looks identical to the AirPower mat that Apple previewed in 2017, planned to release in 2018, but canceled in 2019. Prosser previously said that Apple was facing issues with Apple Watch charging, but it has apparently overcome that problem, with both an Apple Watch and AirPods Pro case shown charging on the mat.

Well, you guys wanted a better picture of “C68”... 😏 Remember how I said that the main problem was that current prototypes didn’t support Apple Watch? Yeah.
Well. They got the Watch working... 👀 pic.twitter.com/LvBeNAAtt3 — Jon Prosser (@jon_prosser) June 18, 2020

Apple revealed its plans for the AirPower mat at its iPhone X event in September 2017. The key feature of the mat is that it would have been able to charge a compatible iPhone, Apple Watch, and AirPods case simultaneously, regardless of each device's position on the mat, and it also would have offered deep integration with iOS.

Apple canceled the AirPower in March 2019, noting that the mat failed to meet its high standards, without diving into specifics. Thanks to patents, we do know that the AirPower was equipped with several overlapping coils inside, and leaker Sonny Dickson previously indicated that one of the primary issues with the mat was overheating.

A few months ago, Prosser claimed that Apple has addressed overheating with its latest wireless charging mat prototypes by reducing the number of coils and integrating an A11 chip that can dynamically manage heat. Prosser added that the mat could be released between the fourth quarter of 2020 and the first quarter of 2021 if testing is successful.

In January, analyst Ming-Chi Kuo forecasted that one of Apple's major new hardware products in the first half of 2020 would include a "smaller wireless charging mat," but this is believed to be a single-device solution. That mat could be announced at WWDC 2020 next week, but it is quite possible that timing has changed due to the global health crisis.

Update: The images of the alleged wireless charging prototype have turned out to be fake.

dmylrea
Hard to imagine the power of an A11 chip just to manage a charging mat!

That's like putting an i7 CPU in a microwave oven to run the timer and monitor the auto-cooking modes!
Score: 29 Votes (Like | Disagree)

alfonsog
$250 sounds right if they call it AirPower Pro
Score: 24 Votes (Like | Disagree)

And a third just to show everyone how rich you are.
Score: 18 Votes (Like | Disagree)

frou
That's a novel way to take the fight to Google ... Release a charging mat with more single-thread CPU performance than any Android phone
Score: 12 Votes (Like | Disagree)