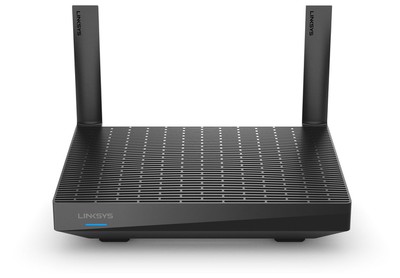 Priced at $149.99, the Max-Stream AX1800 router is Linksys' most affordable WiFi 6 option. WiFi 6, otherwise known as 802.11ax, is the newest generation of WiFi, offering faster speeds and better coverage for homes with many connected devices.

Many smartphone manufacturers have been rolling out WiFi 6 support, though it's still in the early stages of adoption. The iPhone SE, the iPhone 11, ‌iPhone 11‌ Pro, iPhone 11 Pro Max, and iPad Pro all support WiFi 6.

The Max-Stream AX1800 Mesh WiFi 6 Router offers speeds of up to 1.8 Gb/s and coverage of up to 1,700 square feet for connectivity across the home. It is compatible with the entire Linksys Velop line, and can be used in addition to any Linksys mesh product to amplify WiFi coverage, either as a primary router or secondary node.

Linksys also announced the availability of the more expensive $400 Max-Stream Dual-Band Mesh WiFi 6 Router (MR9600) that was announced earlier this year. The MR9600 offers speeds up to 6Gb/s and up to 3,000 square feet of coverage.

Both of the new routers can be purchased from the Linksys website starting today.

MakeAppleAwesomeAgain
I wish Apple still made Airport routers. I've had Linksys, Sitecom, TP-Link, and Asus routers, but none of them are as stable as the latest Airport Extreme. The coverage is not great by 2020 standards, but it's incredibly stable and super-easy to configure. Sooner or later, I need to replace it, but since Apple doesn't seem to care about WiFi 6 in their MacBook line-up, I couldn’t care less.
Score: 28 Votes (Like | Disagree)

I wish Apple still made Airport routers. I've had Linksys, Sitecom, TP-Link, and Asus routers, but none of them are as stable as the latest Airport Extreme. The coverage is not great by 2020 standards, but it's incredibly stable and super-easy to configure. Sooner or later, I need to replace it, but since Apple doesn't seem to care about WiFi 6 in their MacBook line-up, I could care less.

I feel the same way about Apple's decision, and the irony is incredible. Tim Cook and his motley-crew have talked about a wireless future, and yet they gave up on the one product that stood to champion their initiative. Furthermore, it was one of the standout products that Apple got right. I'm still using mine as I type this, and for the same reasons that you mentioned.
Score: 19 Votes (Like | Disagree)

kinless
Pretty sure I’m going to wait for WiFi 6e (6Ghz) integration before upgrading from WiFi 5. I know it won’t be of much use to start, but future-proofing is how I like to roll. With 20+ devices fighting against the neighbors I’ll welcome the new protocol and eventually have a leg up on everyone else.
Score: 8 Votes (Like | Disagree)

I wish Apple still made Airport routers. I've had Linksys, Sitecom, TP-Link, and Asus routers, but none of them are as stable as the latest Airport Extreme. The coverage is not great by 2020 standards, but it's incredibly stable and super-easy to configure. Sooner or later, I need to replace it, but since Apple doesn't seem to care about WiFi 6 in their MacBook line-up, I could care less.

I too mourn the loss of the Airport Routers. Give the Ubiquiti products a try. They take some configuration, but then just work.
Score: 8 Votes (Like | Disagree)

What’s the advantage for you? As far as I can tell 6e will be great for single rooms so presumably things like class rooms or cafes but less good for homes as it doesn’t penetrate walls too well? Or is there something I’m missing?

It's great for mesh networks and great for people who live in apartments that have to compete against the billion other WiFi devices. The slightly shorter range really is more of a feature than a curse.
Score: 7 Votes (Like | Disagree)
Read All Comments

Sunday August 1, 2021 6:21 am PDT by Sami Fathi
Models of the Apple Watch Series 6 with titanium cases part of the "Apple Watch Edition" collection is currently widely unavailable for pick-up in several of Apple's retail stores in the United States and is unavailable entirely for delivery in major markets. Noted by Bloomberg's Mark Gurman in the latest edition of his "Power On" newsletter, titanium models of the Apple Watch Series 6,...
Read Full Article • 147 comments