Apple Has Now Reopened Over 300 Stores, Including Locations in France, Sweden, and the Netherlands This Week

Apple continues to gradually reopen its retail stores around the world as conditions allow, with all 20 of its locations in France resuming business starting today and several more to follow in the Netherlands and Sweden tomorrow. 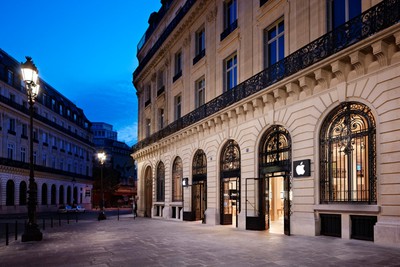 Apple has now reopened over 300 of its 510 retail stores worldwide, according to 9to5Mac, although some locations in the United States subsequently closed again due to anti-racism protests across the country. The company's stores remain closed in the United Kingdom, Brazil, and Singapore, as well as in the Canadian provinces of Ontario and Quebec.

Enhanced health and safety measures are in place, such as social distancing and reduced operating hours. Apple is also requiring that all employees and customers wear a face covering while inside the store and will provide one to customers who do not bring one. At some stores, sales and service are operating on a storefront or curbside basis only.

In a letter to customers last month, Apple said that it looks at all available data before deciding to reopen a store, including local cases, near and long‑term trends, and guidance from national and local health officials. Apple also said that it would not rule out the possibility of closing a store again should local conditions warrant.

I7guy
It must be a huge coordination effort to open these stores worldwide. The most important aspect is protecting it's customers, even if some don't feel they need to be protected.
Score: 3 Votes (Like | Disagree)

Why they do not open stores in the US?

I think it varies by region. At my store you can actually go in and shop and they are limiting the number of people inside.

Makes sense, but they should probably update the app and store hours information to help customers understand what stores offer during this time. We had riots in my area and they were very quick to update the app to display temp closures and new times. I am suggesting they provide some expectations for customers. Some ppl have to drive out of there way to go to a store
Score: 1 Votes (Like | Disagree)

Tuesday May 4, 2021 11:48 am PDT by Juli Clover
Brydge has been making keyboards for Apple's iPads for years now, and the newest model, the Brydge 12.9 MAX+, is compatible with the third, fourth, and fifth-generation iPad Pro models, so it works even with the new mini-LED iPad Pro. Subscribe to the MacRumors YouTube channel for more videos. In our latest YouTube video, we checked out the new Brydge 12.9 MAX+ to see if it's a viable...
Read Full Article • 85 comments