Apple Music has cancelled its Beats 1 radio schedule for Blackout Tuesday and is suggesting that listeners tune in to a radio stream celebrating the best in black music. 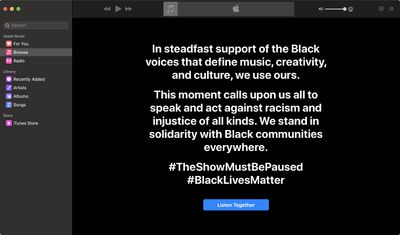 Blackout Tuesday is a campaign organized by the music industry to support Black Lives Matter after Minneapolis citizen George Floyd was killed by police in the course of his arrest.

On launching ‌Apple Music‌, many users on Mac and iOS devices are today being met with a message replacing the usual For You, Browse, and Radio sections, along with a Listen Together button that links to the aforementioned station.

In steadfast support of the Black voices that define music, creativity, and culture, we use ours. This moment calls upon us all to speak and act against racism and injustice of all kinds. We stand in solidarity with Black communities everywhere. #TheShowMustBePaused
#BlackLivesMatter

Following the unrest in numerous U.S. cities after last week's killing of George Floyd, Apple CEO Tim Cook on Sunday addressed the pain that many are feeling and urged others to commit "to creating a better, more just world for everyone."

FlyGuyDEN
Oh wow...complaining about a disruption in Apple Music. Imagine if your entire life (or existence) was interrupted by a bad cop due to the color of your skin.

PAY ATTENTION. THE WORLD IS SPEAKING. LISTEN. UP.
Score: 69 Votes (Like | Disagree)

Binarymix
Hmmm it's pride month, is Apple going to make us listen to Scissor Sisters, Elton John and Cher for the rest of the month? (I'm gay, just making a point.)

I'm all about advocacy, and speaking out, but a company shouldn't FORCE its views on others. There should be an opt out, for those not wanting to be involved.
Score: 57 Votes (Like | Disagree)

Marco123
Honestly, I prefer when tech companies stay out of politics.
In only a few days we have new gay pride bands and services being taken over with black lives matter slogans but we’ll raise MacBook Ram prices by double.
I watch and read the news so I’m well aware of what’s happening in the world.
Score: 56 Votes (Like | Disagree)

magicschoolbus
They stay silent in China when the Chinese government commits atrocities against large groups of people. I guess that is okay. All about the $$.
Score: 48 Votes (Like | Disagree)

Oh wow...complaining about a disruption in Apple Music. Imagine if your entire life (or existence) was interrupted by a bad cop due to the color of your skin.

PAY ATTENTION. THE WORLD IS SPEAKING. LISTEN. UP.

I really find it insulting and inappropriate to block features for paying customers. Regardless of what is going on in the world, people listen to music to relax. Being bombarded with this issue 24/7 is not good for several people's mental health that is already suffering from covid's social distancing.
Score: 48 Votes (Like | Disagree)

On launching Apple Music, many users on Mac and iOS devices are today being met with a message in the Browse and Radio tabs, along with a Listen Together button that links to the aforementioned station.
Otherwise, the Apple Music service is operating as usual. Users are still able to access their music library and search the Apple Music catalog.

I wouldn't call that "operating as usual". You can search for Apple Music playlists and play them that way, but you can't browse them or get suggestions.

I don't mean to be too insensitive to the subject matter, but that's quite a disruption for a $10/mo service (whose client app is already flaky enough as it is). Would it really have hurt to add a little 'x' to close the message and proceed to the regular browsing UI?

Or, if disrupting the service like this is by design and a protest statement, I think the message should be clearer. Some fine print at the bottom saying "Your regular Apple Music features like Browse and For You will be back tomorrow.", maybe? Cause right now, it's just not very clear if this is the Music app being janky or a deliberate choice.
Score: 44 Votes (Like | Disagree)
Read All Comments