European countries have begun to roll out COVID-19 contact tracing apps that take advantage of the Exposure Notification API designed by Apple and Google, with Italy and Latvia both launching new apps over the course of the last few days. 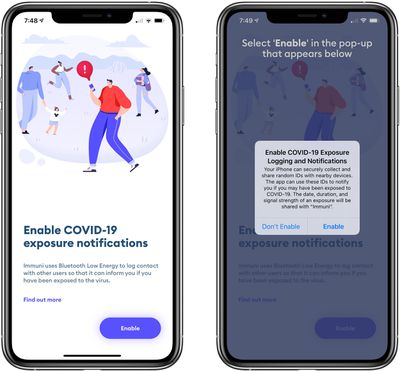 Immuni, the Italian government's #COVID19 contact-tracing app based on the Apple-Google API, is now out. The app does not use GPS. This is what the iOS 13.5 Exposure Logging and Notifications prompt and Settings page look like once Immuni is enabled. https://t.co/JjV8L5laRm pic.twitter.com/LYWCtnPIXw — Federico Viticci (@viticci) June 1, 2020

The app requires express user consent to operate, letting users know that it uses Bluetooth Low Energy to log random ID contact with other users, with date, duration, and signal strength of an exposure shared with the app.

It is based on a methodology developed by European scientists, including those from Latvia, and the new Bluetooth signal exchange algorithm developed by Google and Apple. Using it is voluntary. The app uses Bluetooth to anonymously detect nearby smartphones (within ~2 m proximity, present for longer than 15 minutes) that also have this app installed. This information is only kept on user's device, and automatically deleted after 14 days.

SPKC gets in touch with those individuals who have been confirmed to be a COVID-19 case - regardless of whether they use the app or not. SPKC receives this information from health institutions, not from the app. If the patient uses this app, SPKC will send them a code. When entered in the app, an anonymous notification will be sent to detected contacts that have been at risk to be infected. Sender's identity is not disclosed to recipients. Likewise, the infected individual does not know who the recipients are.

Latvia and Italy are the second and third countries, respectively, to introduce an app that uses Apple's API. Early last week, Switzerland released its "SwissCovid" app for members of the Swiss army, hospital workers, and civil servants. After testing, Switzerland is planning a wider rollout.

Apple released the ‌Exposure Notification‌ API as part of iOS 13.5. When it was released, Apple said that several U.S. states and 22 countries had requested and received access to the API, with more expected to join.

In the United States, there are no apps that use the ‌Exposure Notification‌ API at this time, but Alabama, South Carolina, and North Dakota have apps in the works that may soon see a release. It is not clear if other states will be on board, as some, such as Utah, have developed their own less private solution.

The ‌Exposure Notification‌ feature in iOS 13.5 is disabled by default and doesn't work without an app created by a public health authority and explicit user permission. The API is privacy-focused and collects no personally identifiable data or location information, with additional details available in our Exposure Notification guide.

Sandstorm
I'm from Latvia and I'm very happy how successfully our government (and society in general) has reacted to this pandemic. Early action, support and trust in scientists, no stupid protests or riots - and we are literally down to zero new cases since yesterday. And we've been gradually reopening for some time already (cautiously monitoring situation, of course).

The app "Apturi Covid" ("Stop Covid") also looks good, installed day one. I have zero problems to trust this Apple/Google based temporary solution and, frankly, I trust our government too.

djcerla
As far as I know, Immuni (the Italian app) was initially not based on Google/Apple's API.

You may prefer the intubation room, which is darker.
Score: 13 Votes (Like | Disagree)

Can you cite an example or explain how one's privacy is affected by using Exposure Notification API?
Score: 8 Votes (Like | Disagree)

The source code of the Italian app can be found here on GitHub https://github.com/immuni-app/immuni-app-ios

This is key for a number of reasons, including (1) verifying it does what it says it does, (2) improving it, (3) finding bugs, and (4) applying it in other countries.
Score: 7 Votes (Like | Disagree)

So what is to stop some nefarious (teenagers) to download the app, put their status as positive, and go walk around as many malls / streets / other populated areas to send a whole bunch of false positive contacts? That sounds like something my friends definitely would have done when we were teenagers.

You need a specific code, available to medical personal only, to record a positive.
Score: 6 Votes (Like | Disagree)

I think it’s time to remove your aluminium foil hat. Exposure notification api is very privacy focused, the government can’t get any data from it. And if you don’t believe it you can always read the code on GitHub… assuming you can read code.
Score: 5 Votes (Like | Disagree)
Read All Comments