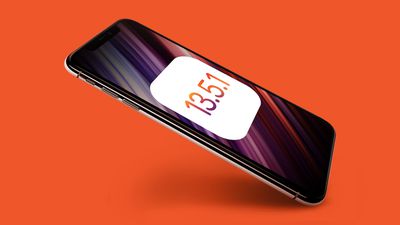 The iOS and iPadOS 13.5.1 updates are available on all eligible devices over-the-air in the Settings app. To access the updates, go to Settings > General > Software Update.

According to Apple's release notes, the update provides important security updates and it is recommended for all users.

While not specified in the main release notes, Apple's security content document for the update acknowledges that it patches a vulnerability related to the unc0ver jailbreaking tool that was released last week and allegedly works on all recent versions of iOS, including iOS 13.5.

MiBook84
But iPadOS still lacks a native calculator. The only computer that does?
Score: 32 Votes (Like | Disagree)

nfl46
Use this same energy to fix the mail app, Apple.
Score: 28 Votes (Like | Disagree)

There are a billion calculator apps on the App Store. Admittedly that requires expending 8-12 calories to tap on a button to install the app, and consumes 5 seconds of your day that could be spent on more important things.

your attitude is hilarious, considering you just defended apple touting globally that the ipad is a laptop "replacement" that has not had real mouse support until...somewhere around a month ago (accessibility mouse support at ios 13 launch is not mouse support).

until it split off into iPadOS it existed with iOS which did have a calculator.

iPad that should replace laptops could not have a calculator, while their *mobile phones* can, their desktop OS can (and does. speaking of, how about that super special catalyst software for app parity between ipad and macos? no calculator that way?) and Windows can?

but you *really* want to snark someone about how they can go get one of "a billion" calculator apps from the app store that had about 1.8 million apps total as of this year? your hyperbole is so extreme it's childish.

Depends on how you look at it, try typing that much code.:p
Score: 9 Votes (Like | Disagree)