Leaker: Apple to Launch New Low-Cost iPad This Year With A12 Chip

Apple's eighth-generation iPad will arrive this year and feature an A12 chip, according to an anonymous Twitter account with a thus-far proven track record for forthcoming Apple product leaks. 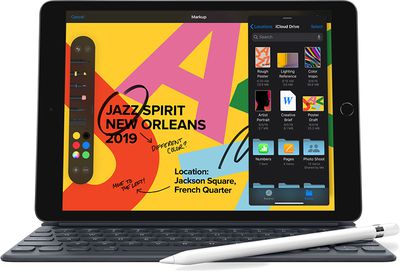 On Thursday, Apple analyst Ming-Chi Kuo said that Apple is working on two new ‌iPad‌ models, which include a 10.8-inch ‌‌iPad‌‌ and an 8.5 to 9-inch ‌‌iPad‌‌ mini. These new iPads are expected to launch in the second half of 2020 and the first half of 2021, respectively.

Kuo said that he believes the two new ‌‌iPad‌‌ models will follow the ‌iPhone SE‌'s product strategy, which means affordable price points. The existing low-cost ‌‌iPad‌‌ is 10.2 inches, so it's not clear if Apple plans to introduce larger-sized tablets or increase the available display size through bezel reduction.

Rumors aside, it would be reasonable to expect a new entry-level ‌iPad‌ this year, as the device has been updated annually for the past three generations. Also, the A10 chip was first used in the iPhone 7 and 7 Plus, so there's a good case for arguing that it's about time Apple took the processing power up a notch in its most affordable ‌iPad‌. The A12 chip first appeared in the ‌iPhone‌ XS, XS Max, XR and the 2019 versions of the iPad Air and ‌iPad‌ Mini.

In recent weeks, the anonymously-run Twitter account "L0vetodream" has noted that some products and components have been delayed, including the new iMac models and the A14 chip. It has also hinted at a 2021 release for a rumored 14-inch MacBook Pro.

MrGimper
I feel non-laminated screens really annoy me more than they should.
Score: 14 Votes (Like | Disagree)

Plus the iPad Air will get updated.

I don't see new technology in the bottom of the line iPad.

It doesn't even have the 2nd gen touch ID sensor that the air and mini have.

literally NO ONE complained about “so few models” when we had only ONE model for YEARS under jobs.

yes the problem is he is creating a platform to make more by giving you less product in return. It’s quite easy to see actually. Under Jobs we got the best product at all times. This idiot increased the price of the best products by hundreds, sales went down, so he created a lesser product for the price we used to pay for the best. And now no ones buying the average iPad either so he’s giving you less...again. That’s how you ruin your brand.

There are four models of iPad, five if you count the Pros as two separate models. Any human can count the number of models on a single hand, barring a disability.

Sales pay the bills of the software dev along with the hardware dev. Product segmentation is a real thing in every industry, because a company’s existence is to SELL a product. Or a service.

You got what Jobs gave you, which wasn’t always “the best”, but it was the only, you just didn’t know any better. Most were just happy to get what they got.

No one wax’s poetic about the first gen MacBook Air. It was slow and expensive and only had one USB port. Tim Cook is simply trying to broaden the iPad appeal the same way we have more than one Mac, because people like a 16” MacBook Pro over a 13” MacBook Air.

This isn’t Soviet Russia where you got one choice of car or you hoofed it. Choice drives competition, sales and innovation.

Maybe the iPad isn’t for you.
Score: 5 Votes (Like | Disagree)
Read All Comments