Apple has hired multiple well-known software engineers with cloud computing expertise in recent months, according to a report from tech site Protocol. 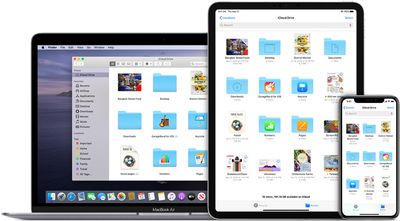 The range of employees Apple has hired has created "a stir" in the "tight-knit cloud community," and is a sign that Apple is perhaps planning to build serious cloud infrastructure to compete with Amazon, Microsoft, and Google.

Employees have expertise in containers and Kubernetes. Michael Crosby, for example, known as one of the engineers of containers as they exist today, joined Apple in 2020. Arun Gupta, who worked at Amazon Web Services, joined Apple in February and is leading Apple's open source efforts. Another former AWS employee who worked on managed container services, Maksym Pavlenko, has also transitioned to Apple. Francesc Campoy, an ex-Google employee, is now at Apple working on Kubernetes, an open source container orchestration platform that allows for managing containerized applications across hosts.

Apple has also listed multiple job postings that suggest it is working on new tools for its internal software development teams.

Apple already has a huge cloud-based platform that encompasses iCloud, the App Store, Apple TV+, Apple Music, and more, but it is not up to par with the cloud technology used by companies like Amazon, Microsoft, Google, Facebook, and Netflix.

Apple in 2018 announced plans to invest $10 billion in data center construction, and in 2019, joined the Cloud Native Computing Foundation that hosts Kubernetes and containers.

Blackstick
Cheaper to poach the employees than pay the AWS/GCP bills.
Score: 14 Votes (Like | Disagree)

The range of employees Apple has hired has created "a stir" in the "tight-knit cloud community," and is a sign that Apple is perhaps planning to build serious cloud infrastructure to compete with Amazon, Microsoft, and Google.

I would be pleasantly surprised if Apple is going to try to compete with AWS, GCP, and Azure. Their cloud solutions for anything outside of Apple have been nothing short of mediocrity so far.
Score: 13 Votes (Like | Disagree)

rpat701
Good. iCould could use some love. It's terrible and annoying.
Score: 11 Votes (Like | Disagree)

trusso
From what I've read, Apple's backend infrastructure could definitely use some work. Especially iCloud, which has been duct-taped together from parts of AppleID, MobileMe, .Mac and iTools over the past 20 years. Kind of like Microsoft Windows, Apple's cloud services have become a cobbled-together hodgepodge that generally works on the surface... but underneath it's a band-aid job. Like the water tables underneath New York and San Francisco, it's...

Okay, enough with the analogies. The infrastructure needs work (and ideally, a lot of rework) for both Apple's sake and its customers.
Score: 8 Votes (Like | Disagree)

Ahm, ok. So Apple has absolutely no vision where they want to go or what they want to do with "the cloud", so they hire a bunch of people that have worked on different projects that had something to do with technologies that either work in "the cloud" or that are sometimes used to create "a cloud".

"The cloud" can be an unbelievable amount of completely different things. For most people, it's just "someone else's computer". This is what AWS is at its core.

Then there are all those streaming and file sharing services and applications running as subscription services somewhere else.

Azure can also do what AWS offers, and it hosts a bunch of application services as well. But on top of that, Microsoft is migrating a lot of compute (and AI) tasks away from the client side into Azure -- and those services can also be "consumed" by software developers that write software using Microsoft development tools. That kind of "cloud" is an entirely different beast - and this is where it gets really interesting and where everybody else is playing catch-up with Microsoft. The vision is to turn Azure into "the computer of the world", and their entire product strategy has been evolving around this vision for years already.

So... What's Apple trying to achieve here? Is there a vision involved or are they just panicking because that's another party they've missed?

Nobody knows the reason for the hires. There’s a justification inside Apple though.
Score: 8 Votes (Like | Disagree)
Read All Comments