Alongside the announcement of the iPhone SE back on April 15, regulatory documents for what appeared to be new Powerbeats Pro models were also uploaded to the Federal Communications Commission's website, reflecting new Apple model numbers of A2453 and A2454 for the left and right earpieces. 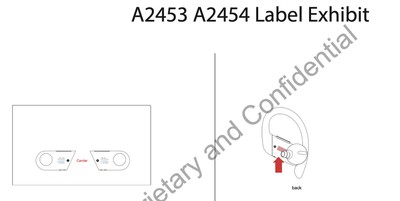 The regulatory documents filed for the new ‌Powerbeats Pro‌ models don't appear to have revealed significant changes to the wire-free earbuds, but speculation about what they might be has grown as the updated models have gained regulatory certification in other countries in recent weeks, including in Malaysia and South Korea.

Much of the speculation has suggested that these new models represent a second-generation "‌Powerbeats Pro‌ 2" that is set for imminent release, but we believe it's more likely a minor internal tweak to the existing models that will soon be or has already been quietly released without any announcement or changes to public-facing specs.

Apple maintains lists of regulatory Declarations of Conformity for the European Union for all of its current products on its website, and the current listing for ‌Powerbeats Pro‌ on Apple's Beats page mentions both sets of model numbers (A2047/A2048 and A2453/A2454) as of April 15, suggesting that Apple considers these sets of model numbers to both be current-generation products.

With nearly a month gone by since the first regulatory filings for the new model numbers and Apple openly acknowledging them on its website, the most probable explanation is that these minor revisions of the ‌Powerbeats Pro‌ have already begun rolling out.

If you've recently purchased ‌Powerbeats Pro‌, you can check the fine print on the inside of each earpiece and let us know if you're seeing the new A2453/A2454 model numbers.

Lights87
Would love if the v2 version had the ability for the case to charge wirelessly like the airpods case does
Score: 2 Votes (Like | Disagree)

827538
Still no update to the Beats Studio 3 Wireless that my wife has been waiting on for some time.
Score: 2 Votes (Like | Disagree)

I honestly think the Beats Studio 3's - being so close to the Solo Beats 3's or now Pro's in features, may now be dead. That along with rumours of Apple going into over-the-ear pro headset market this year.

The only minimal tweak the Powerbeats Pro should get is: a SMALLER charging/carrying case! Put them inside a case ... parrellel yet mirrored to one another (like this L:T you get what I mean) along with similar spare charges.

Maybe, but over ear headphones are definitely more popular than on ear headphones like the Pro. I'm sure my other half would be happy with an Apple version. Either way Apple is taking a long time.
Score: 1 Votes (Like | Disagree)

Any idea what the changes are between the two models? I've had so many issues with my PBP's. The latest was the right one staying connected, in spite of being cleaned and properly berthed, and then not charging normally. I have them in the case, 'charging', if they feel so motivated. *sigh*

My wife has the same connection issue with hers. She only uses them on the Peloton but it’s guaranteed every other time to have connection issues. Charging seems fine. They are sharp looking in white but not being reliable is a pain for the price.
Score: 1 Votes (Like | Disagree)
Read All Comments

Monday May 10, 2021 10:41 am PDT by Juli Clover
Apple's upcoming iPhone 13 models will be slightly thicker than the iPhone 12 models and will also feature larger, thicker camera bumps with lenses that protrude less, according to iPhone 13 schematics seen by MacRumors. The new iPhone 13 and 13 Pro models are expected to feature a thickness of 7.57mm, up from 7.4mm in the iPhone 12 models. That's an increase of 0.17mm, which won't be hugely ...
Read Full Article • 128 comments

Monday May 10, 2021 8:51 am PDT by Hartley Charlton
Independent technicians have reportedly been able to use leaked MacBook schematics to aid repairs (via Vice). Last month, Apple supplier Quanta Computer was hit with an attack by the ransomware group known as "REvil," leading to a large quantity of internal Apple documents about both released and unreleased devices being exposed. The leaked PDFs, available on a number of forums and online...
Read Full Article • 86 comments