Apple in the iOS 13.5 beta introduced a new Group FaceTime feature that's designed to disable the option that automatically enlarges the tile of the person who is speaking. 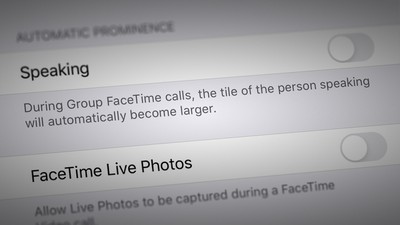 Group ‌FaceTime‌, by default, has a dynamic view with a tile for each person. The person who is speaking at the current time has a larger tile, while tiles for people who are not talking fade into the background, a layout that's not always ideal.

In the ‌FaceTime‌ section of the Settings app, there's now an "Automatic Prominence" section with a "Speaking" toggle. Turning off the "Speaking" toggle makes it so the tile for the person who's talking in ‌FaceTime‌ won't get larger, allowing tiles for all people to remain the same size. Enlarging a person's tile can be done by tapping it, as noted by The Verge.

A grid with static image sizes for all participants is perhaps preferable for meetings and events where multiple people are talking at once or right after one another, and it mimics layout options available in Zoom and other video chatting apps.

The iOS 13.5 beta also makes it easier to unlock an iPhone with a passcode when wearing a mask by bringing up the passcode interface more quickly and it lays the foundation for the introduction of the exposure notification API that Apple plans to release for health apps in May.

DCstewieG
Hot take: A good idea but this should be a toggle option in the call, not tucked away in the Settings app.
Score: 30 Votes (Like | Disagree)

Demultiplex_Dfunc
During this trying time, I‘m using Zoom daily. I will likely use Microsoft Team in near future. FaceTime, well not at all and I’m all in on Apple ecosystem. FaceTime is increasingly becoming irrelevant and so is iMessage. Alternatives not only exist but are forcing people within the wall garden to use them.
Score: 12 Votes (Like | Disagree)

CMelton
THANK GOD! This is the number one reason it doesn’t get used by my family and friends. Constant moving tiles of a group of people having a laugh is migraine inducing.
This has been a long time coming!
Score: 11 Votes (Like | Disagree)

subjonas
I agree the toggle should be in the FaceTime app. Also, there should still be some visual indication of who’s talking, like how other apps highlight the outline of the person’s box.
Score: 8 Votes (Like | Disagree)

munpip214
Okay great. Now we just need wide shots instead of square. If it is just facetime with one person it works, but family to family cuts off the side people.
Score: 6 Votes (Like | Disagree)
Read All Comments

Sunday August 1, 2021 6:21 am PDT by Sami Fathi
Models of the Apple Watch Series 6 with titanium cases part of the "Apple Watch Edition" collection is currently widely unavailable for pick-up in several of Apple's retail stores in the United States and is unavailable entirely for delivery in major markets. Noted by Bloomberg's Mark Gurman in the latest edition of his "Power On" newsletter, titanium models of the Apple Watch Series 6,...
Read Full Article • 149 comments