The ‌second-generation iPhone‌ SE was announced last week, and with pre-orders taking place on April 17, the first deliveries of the new device have started arriving for customers around the world. Apple has also begun taking orders in several of its online regional stores. 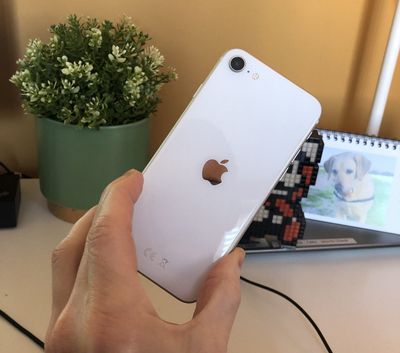 Photo by MacRumors forum member Aneres11
The original iPhone SE was a budget 4-inch ‌iPhone‌ before being discontinued in 2018, but Apple revived the name this month with a new 4.7-inch model that looks like an ‌iPhone‌ 8 but has internals similar to those of the ‌iPhone‌ 11.

On Thursday, Apple released an iOS 13.4.1 update for ‌iPhone SE‌ owners and other models that address an issue which prevented devices running iOS 13.4 from participating in FaceTime calls with devices running older versions of Apple's mobile operating system.

MacRumors readers have confirmed that models arriving to customers today have iOS 13.4 installed, so a day-one software update is highly recommended.

Starting today, the new ‌iPhone SE‌ can be ordered from Apple.com and is also available from Apple Authorized Resellers and select carriers in the U.S. and more than 40 other countries and regions. Join in the discussion on the MacRumors iPhone SE pre-order forum thread.

I get it's a new budget iPhone release but as basically a parts bin model, a 3-year old iPhone 8 with updated internals, does the SE really truly deserve the huge amount of column inches it's getting? Yawn.

The original SE was the same thing, old chassis with upgraded internals for cheap and it was a success. The new SE is the same thing basically.
Score: 14 Votes (Like | Disagree)

jntdroid
I don't get the criticisms for the SE.

SE doesn't mean "small edition". I'm sorry to everybody that thought they were going to bring back the old SE/5S/5 form factor, but that was never in the cards. And for those stuck on "small", the original SE basically took a previous smaller popular form factor and stuck better guts in it. This new SE is the same concept - it's taking a previous smaller popular form factor (yes, it is indeed popular) and sticking better guts in it. They would probably have to re-tool their manufacturing processes and facilities to make anything other than the 8's form factor, which adds to costs. They can still pump out the 8's form factor with ease.

It's a solid screen for most of the general population, it's a solid camera (some reviews and threads are showing it to be on par with the 11 in many scenarios except for night mode), it's an incredible processor with years of updates ahead, Wi-Fi 6 (future proofing), Gigabit LTE (somewhat future proofing), reviews have showed decent to solid battery life, 3gb of RAM (4 would be better, but 3 is still a solid bump and more than enough for most iPhone users), it reverts to a still-popular (and fast/secure) Touch ID. It's also in a smaller form factor than any of their current line-up.

Is it for everybody? No. But this forum doesn't represent the general population. A lot of people still use 6S's, 7's, 8's, and don't want something bigger and don't want Face ID. This is the perfect upgrade for them (yes, even for users of the 8), keeping them on a familiar chassis while bumping up power and extending their upgrade life.
Score: 12 Votes (Like | Disagree)

iRutherford
I feel bad for European consumers who have to put up with those ugly regulatory markings. And people often accuse them of using fake iPhones.
Score: 9 Votes (Like | Disagree)

I didn’t see them until you mentioned it. They are hideous.

I‘m living in the EU so my current iPhone SE also has them but I still had to check because in all the years that I had this phone (or other Smartphones/iPhones) I never consciously noticed them. I guess we’re in Europe are already so used to them that we don’t notice anymore.
Score: 9 Votes (Like | Disagree)

I get it's a new budget iPhone release but as basically a parts bin model, a 3-year old iPhone 8 with updated internals, does the SE really truly deserve the huge amount of column inches it's getting? Even calling it a "special edition" is typical hyperbole. It's basically an incremental 8S or 9 if you're being generous. Yawn.

From my point of view, it does deserve the attention.

The price of telephones has been creeping up and up, and I for one have no intention of spending such amounts on a telephone. I would imagine there are a lot of people like me and this is a great indication from Apple that they know that people like me are out there.

The fact that it's been covered so much is not only helping Apple promote this new product but also informing users like me that Apple still makes a phone for us. God forbid we'd have to go to Android.

Oh, and it’s “iPhone” not ”I Phone”. Are you sure that you’re not using an Android phone ATM? ?
Score: 9 Votes (Like | Disagree)
Read All Comments