Every year on April 22 we celebrate Earth Day in support of environmental causes, and during a normal year, Apple goes all out with Earth Day-related initiatives, green leaf logos on Apple retail stores, green T-shirts for employees, Earth Day Apple Watch challenges, and more. 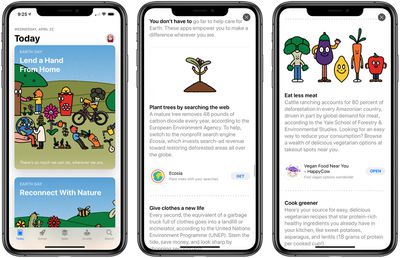 This year, amid the ongoing health crisis, Apple's celebrations are muted, as with retail stores closed, there's no opportunity for in-store celebrations. Instead, Apple is promoting Earth Day-related apps in its App Store and has shared an Earth Day-themed Apple TV+ short film.

More than ever before, we can see the crucial role each of us plays in our collective wellbeing—for humanity and for our planet. Apple embraces this every day as we work to operate on clean energy and use fewer of the world’s resources—and we aren’t slowing down. #EarthDay2020 — Tim Cook (@tim_cook) April 22, 2020

There are several Earth Day categories in the Today section of the ‌App Store‌, highlighting a wide range of apps that are focused on the environment.

In the "Lend a Hand From Home" category, for example, Apple highlights Ecosia, an app that lets you plant trees with searches, and Poshmark, an app for buying second-hand clothes. Happy Cow, an app for finding plant-based food options is promoted, along with Green Kitchen, an app filled with vegetarian recipes.

A "Reconnect with Nature" section features apps for learning about local flora and fauna through pictures taken with the camera, while a Disney+ section highlights new Disneynature films on elephants, dolphins, and penguins.

There's also an "Explore the Deep Blue Sea" section in the Today portion of the ‌App Store‌ that highlights Apple Arcade game "Beyond Blue, which is described as an open-world adventure where players take on the role of Mirai, a marine biologist who explores a myriad of ocean life.

Last Friday, Apple released a new Earth Day short film narrated by Meryl Streep. "Here We Are: Notes for Living on Planet Earth" teaches children about the wonders of the planet.

This year marks the 50th anniversary of celebrating Earth Day around the world, and the theme for Earth Day 2020 is climate action.

Whenever I come across an old PC, a broken smartphone or a big batch of USB or power cables, I use this service.
Score: 4 Votes (Like | Disagree)

Peperino
It will be great to celebrate Earth day if Apple will actually design products that are NOT disposable appliances (Macbooks Air, Pro)...!
Score: 2 Votes (Like | Disagree)

Whenever I come across an old PC, a broken smartphone or a big batch of USB or power cables, I use this service.

Wow. Did not know how broad this program was in terms of what you can send. Thank you for sharing!
Score: 1 Votes (Like | Disagree)
Read All Comments