Apple has broadened the reach of its major services, including the App Store, iCloud, Apple Podcasts, and Apple Arcade, by announcing their launch in 20 additional countries starting today. Apple also said on Tuesday it was expanding the availability of Apple Music to 52 additional countries. 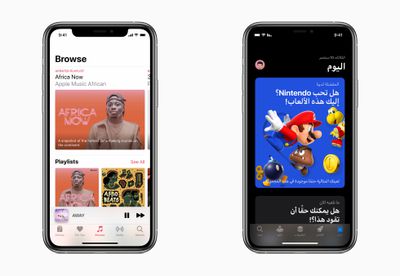 "We're delighted to bring many of Apple's most beloved Services to users in more countries than ever before," said Oliver Schusser, Apple's vice president of Apple Music and International Content. "We hope our customers can discover their new favorite apps, games, music, and podcasts as we continue to celebrate the world's best creators, artists, and developers."

The ‌App Store‌, ‌Apple Arcade‌, ‌Apple Music‌, ‌Apple Podcasts‌ and ‌iCloud‌ are now available in the following countries and regions:

‌Apple Music‌ is also expanding to the following countries and regions:

With global smartphone shipments falling, today's expansion reflects Apple's growing reliance on services as a major source of revenue alongside its hardware. In terms of revenue and profit, Apple recorded its best quarter ever at the start of this year, and CEO Tim Cook hailed the company's "all-time record" for services.

Tovenaar
I never would've thought there are countries that didn't have access to the app store. I wonder what took so long.
Score: 6 Votes (Like | Disagree)

I would sure love to see them expand their iTunes TV Store... but I guess that is no longer a priority.

Problem with TV Shows (in Europe) is the digital rights thing, the networks sell the tv shows to local networks and the local networks have exclusive access to them. Unfortunately it's not an easy solution, and it's not for Apple to solve.
Score: 5 Votes (Like | Disagree)

JosephAW
How about expanding the default iCloud storage from the 5GB size to something more modern now that it's 2020.
Score: 5 Votes (Like | Disagree)

I never would've thought there are countries that didn't have access to the app store. I wonder what took so long.

Compliance with local laws and regulations, dealing with the local financial systems, localization of the UI. All that gets run through a cost/benefit analysis.
Score: 1 Votes (Like | Disagree)

Mman250
I would sure love to see them expand their iTunes TV Store... but I guess that is no longer a priority.
Score: 1 Votes (Like | Disagree)
Read All Comments