OnePlus this week launched its newest flagship smartphones, the OnePlus 8 and OnePlus 8 Pro, offering high-end specs and features at a cheaper price than many of its competitors.

We got our hands on one of the OnePlus 8 Pro devices and thought we'd see how it measures up to the iPhone 11 Pro Max in our latest YouTube video.

Subscribe to the MacRumors YouTube channel for more videos.
There are a few models at different price points, but for our video, we're comparing the $899 OnePlus 8 Pro with 8GB RAM and 128GB of storage, plus a pretty nice looking exclusive "glacial green" color, to the mostly comparable $1249 ‌iPhone 11 Pro Max‌ with 4GB RAM and 256GB storage, which is a $350 premium. 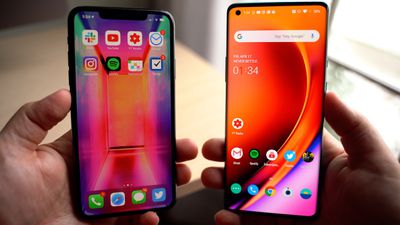 Both smartphones are attractive, well-designed, and have a premium look. The OnePlus 8 Pro features a frosted back much like the iPhone 11 Pro, and it looks attractive in the glacial green shade. OnePlus gets an edge over Apple when it comes to fun colors, as Apple is rather conservative with its Pro lineup.

On the side, the OnePlus 8 Pro has an alert slider that can be toggled between silent, vibrate, and ringer on, one more option than the iPhone provides with its vibrate and ringer on options.

The OnePlus 8 Pro features a 6.7-inch display, which is just a bit bigger than the ‌iPhone 11 Pro Max‌'s 6.5-inch display. It's an OLED display with a 120Hz refresh date and a 3168 x 1440 resolution. Apple hasn't yet brought 120Hz refresh rates to the ‌iPhone‌, but there have been rumors of a 120Hz ‌iPhone‌ display ever since Apple added the feature to the iPad Pro.

Samsung's latest flagship smartphone, the S20 Ultra, also has a 120Hz display but limited it to only 1080p. The new OnePlus 8 Pro supports 120Hz at the full resolution of the display, though at the cost of some battery life.

The OnePlus 8 Pro doesn't have anything like the TrueDepth Camera System or Face ID, so there's just a single hole punch camera cutout at the front on the right side, and it's otherwise all display.

New to the OnePlus 8 Pro this year is wireless charging, a feature that iPhones have had for years now. It supports 30W fast wireless charging with a $70 charger, which means it can be charged from 0 to 50 percent in about 30 minutes (any other Qi charger is 5W, though). A 30W power adapter is included for fast wired charging though. The ‌iPhone 11 Pro Max‌ is limited to 7.5W wireless charging while wired fast charging requires a Lightning to USB-C cable and 18W+ power adapter.

Battery life between the two phones isn't too different. The ‌iPhone 11 Pro Max‌ has a 3,969 mAh battery, and the OnePlus 8 Pro has a 4,500 mAh battery.

We can only test around the house at the current time so we didn't do a deep dive into the camera, but the OnePlus 8 Pro is more on par with the ‌iPhone‌. Most of the time, the ‌iPhone‌ images still look more natural, but OnePlus does a better job at ultra wide-angle image quality, and some portrait mode photos look better.

The OnePlus 8 Pro still lags behind when it comes to low-light photography (such as indoor lighting), but the longer exposure night mode images are on par with Night Mode images from the ‌iPhone‌. There's also a macro photo mode, which works well and captures images with quite a lot of detail.

High-end smartphones are all so fast now that it's not useful to compare performance, and both the OnePlus 8 Pro and the ‌iPhone 11 Pro Max‌ perform at a level expected of a premium smartphone.

Even though the OnePlus 8 Pro is able to offer a comparable feature set to the ‌iPhone 11 Pro Max‌, operating system is such a huge factor when purchasing a smartphone. A person deep in the iOS ecosystem (like many of us here at MacRumors) isn't going to swap over to Android, and the same goes for Android users who are used to that operating system.

The OnePlus 8 Pro and the ‌iPhone 11 Pro Max‌ are both great smartphones, and if you are in the Android ecosystem, OnePlus' new device is worth checking out. If you're someone without a strong operating system preference, the OnePlus 8 Pro is a solid ‌iPhone‌ competitor that has a lot to offer at a lower price.

Ds6778
There is just something so off putting about android phones.
Score: 27 Votes (Like | Disagree)

satchmo
From a purely aesthetic view, I think the OnePlus looks cheap. Different size bezels and not the same build quality as the iPhone 11. The iPhone just looks more premium.

The iPhone's only negative is the thick bezels. That hopefully will be rectified once the iPhone 12 finally arrives with slimmer bezels and a smaller notch.
Score: 13 Votes (Like | Disagree)

Mdracer
I cannot for the life of me see the value in a curved screen that falls off the edges. The color hue changes do not enhance the screen at all. It is an inferior way to try to eliminate the side bezel.
Score: 11 Votes (Like | Disagree)

I've had both iPhones and Android phones. For several years I owned both at the same time. Android as my personal and iPhone for work.

I've owned two OnePlus phones a 6T and a 7 Pro. I've had the 7 Pro for almost a year now.
For those that think the build quality of the OnePlus phones is sub par, you are mistaken.
For those that think Android is junk, again you are mistaken.
Android with the correct skin is on par with iOS and in some ways better due to the opportunity of customization.
Both are Unix/Linux beneath the skin just a gui on top. Android is Linux and iOS is BSD.

I like OnePlus because I can unlock the bootloader and do what I want.
I own the phone. With iOS you never really "own" the phone.
Apple decides when your phone is obsolete. Once they stop offering any update, the phone is done.

I have an iPhone 5 that still functions. Not sure what 'done' means to you. I'm no Apple fanboy, but when a very old iPhone 5 still runs smooth and has pretty much full iOS functionality on it, there's something to be said for that.

Sure you can't load custom ROMs onto an iPhone, but you don't need to. That's sort of the point. And 95% of Android users wouldn't know how to do it anyhow, 1% brick their devices trying, 3% do it once or twice and move on and the remaining 1% push to extend the life of their old Android slabs. I've been there - loading different ROMs onto old devices. I've had many Android phones over the last 5 years including Essential etc. All sorts of fun.

But my iPhone XS Max is just 'there'. It always works, I can mirror the screen and control it on my Matebook X Pro thanks to Dell Mobile Connect now, and I have zero concern about Apple declaring it EOL. Even if I have it when that happens, I know it will continue to function for years and years and operate smooth as silk, just like my 5 still does.
Score: 10 Votes (Like | Disagree)

techwhiz
I've had both iPhones and Android phones. For several years I owned both at the same time. Android as my personal and iPhone for work.

I've owned two OnePlus phones a 6T and a 7 Pro. I've had the 7 Pro for almost a year now.
For those that think the build quality of the OnePlus phones is sub par, you are mistaken.
For those that think Android is junk, again you are mistaken.
Android with the correct skin is on par with iOS and in some ways better due to the opportunity of customization.
Both are Unix/Linux beneath the skin just a gui on top. Android is Linux and iOS is BSD.

I like OnePlus because I can unlock the bootloader and do what I want.
I own the phone. With iOS you never really "own" the phone.
Apple decides when your phone is obsolete. Once they stop offering any update, the phone is done.
Score: 8 Votes (Like | Disagree)

itsmilo
I absolutely hate those longer but not wider phones. My work phone from Samsung is the same and ugh
Score: 7 Votes (Like | Disagree)
Read All Comments