The upcoming Apple Watch Series 6 set to be released this fall could include a Touch ID fingerprint sensor built into the crown of the device, according to Israeli site The Verifier, which cites "senior sources" who have worked with its staff for a "number of years" as the source of the rumor. 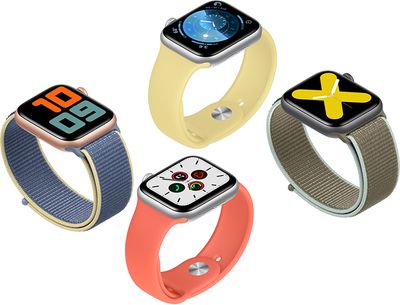 It's not clear how the alleged ‌Touch ID‌ fingerprint sensor would be implemented, as the Digital Crown is already used for capturing an ECG in the current Apple Watch models with an included electrode.

A ‌Touch ID‌ fingerprint sensor sounds like somewhat of an odd feature to add to the Apple Watch, but it could potentially alleviate the need for a PIN when putting on the Apple Watch in the morning. The Apple Watch already unlocks when the iPhone is unlocked, but unlocking it on a standalone basis requires a numerical code to be entered.

The Apple Watch itself also uses skin contact as a biometric authentication option for Apple Pay payments and other functions. In the Apple Watch Series 7, The Verifier claims that the ‌Touch ID‌ fingerprint sensor will be relocated to the display, but two drastic ‌Touch ID‌ tweaks in two years may be questionable as Apple tends to make fewer changes to Apple Watch hardware.

Apple's next-generation Apple Watch is also said to include an improved battery, broader support for LTE, and support for WiFi 6.

The Verifier also outlines some of the features coming to watchOS 7, many of which we've heard before. watchOS 7 will allegedly include a "fresh design," updates to built-in apps, and improvements to Siri, with little other information included.

Echoing other rumors, The Verifier says Apple is working on pulse ox monitoring for the Apple Watch and sleep tracking capabilities. Pulse oximetry support would allow the Apple Watch to measure the oxygen levels in the blood, making sure a person's oxygen saturation does not drop to a dangerous level, which can be indicative of a serious and immediate problem that needs to be addressed.

Sleep tracking is a feature that we've heard a lot about in recent months, with Apple expected to introduce sleep monitoring capabilities in the near future. Sleep tracking would measure metrics like time asleep and sleep quality.

The Verifier last week claimed that tvOS 14 will feature a new Kids Mode with content geared towards children and a Screen Time feature to measure time spent watching TV.

In the past, The Verifier has shared some questionable information that has not panned out, so it's worth viewing these rumors with some skepticism until confirmed by another source.

Dulcimer
An FP sensor built into the display would be ideal but doesn’t seem that necessary altogether.
Score: 15 Votes (Like | Disagree)

markgpearse
I wonder if there will ever be a way to measure blood pressure
Score: 13 Votes (Like | Disagree)

unobtainium
Pulse oximetry would be great to have, especially now.
Score: 12 Votes (Like | Disagree)

Wake me up when the Apple Watch finally gets a camera. Until then meh

Why will that be useful?
Score: 10 Votes (Like | Disagree)

QCassidy352
Better battery is really all I want. Pulse oximetry and sleep tracking are things I would never use. Biometric unlocking is great on a phone, which one typically locks and unlocks many times per day. I usually unlock my watch once, maybe twice per day, and I don’t see the point. (I do have a s5, so I’m probably not the intended audience for this.)
Score: 9 Votes (Like | Disagree)
Read All Comments