iPad stocks are reportedly running low in China because parents are buying them to help with e-learning at home in response to school closures relating to the coronavirus outbreak. 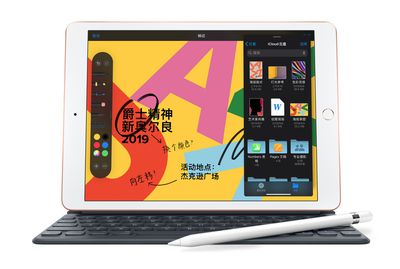 Nikkei Asian Review today reports that labor shortages have also seen suppliers struggle to meet production demands, amid government-imposed restrictions in an attempt to curb the spread of the virus.

"Later the need surged even higher when China opened schools but asked students to take the courses online," one person familiar with the situation said. "The shortage of the iPad range is up to four weeks of waiting, especially for the cheaper models. The supply could not meet the pace of the demand at all."

Today, Apple's regional online store for China shows a three to four week delivery time for orders of the low-cost 10.2-inch ‌iPad‌, while anyone ordering a 12.9-inch iPad Pro will have a wait of up to two weeks.

Demand is said to have been rising since January when Beijing imposed quarantine measures. One source told Nikkei that Apple recently ordered a 20 percent increase in production of iPads for the first half of this year, compared with the production forecast it gave suppliers in January, prior to the outbreak.

In Wuhan, where the outbreak began, schools are closed, and children have been using an Alibaba-owned corporate app called DingTalk to attend classes remotely. At least 50 million students are reportedly now taking classes online using the app, which would go a long way to explaining the strong demand for iPads.

Typically this would be positive news for Apple, but with suppliers severely affected by the spread of the coronavirus, the company has been unable to keep ‌iPad‌ stocks plentiful. Conversely, Apple has been unable to match 2019's iPhone sales figures across China, with fewer than 500,000 iPhones sold last month amid the ongoing curbs on travel and transport, according to government data.

Apple told investors in February that it wouldn't meet its revenue guidance for the quarter because of the impact from the epidemic.

The company closed all 42 of its retail stores in China at the beginning of February as the outbreak worsened, but most of the stores have re-opened, although many are operating with shortened hours. New infections and deaths reported in China have steadily declined in recent weeks, suggesting the enforced movement restrictions are having an impact on the spread of the disease.

iPadified
I wonder if the Coronavirus will push e-learning and video conference calls so it will be more common and perhaps change our sometimes old fashioned means to communicate. I heard the prime ministers of EU met via video link the other day - really good idea. Safe, quick, cheap and with minimal CO2 footprint. Quick, cheap and low CO2 footprint was apparently not sufficient arguments for using video calls. Does say a lot about the human nature.
Score: 11 Votes (Like | Disagree)

Agit21
This doesnt suprise me. IT Businesses will profit from any kind of virus.
People wont come together like they used to and meetings will be held online.
Score: 5 Votes (Like | Disagree)

jpn
truly a useful device fueled by great apps.
literally at the crossroads of humanity and technology.
Score: 5 Votes (Like | Disagree)

I wonder if the Coronavirus will push e-learning and video conference calls so it will be more common and perhaps change our sometimes old fashioned means to communicate. I heard the prime ministers of EU met via video link the other day - really good idea. Safe, quick, cheap and with minimal CO2 footprint. Quick, cheap and low CO2 footprint was apparently not sufficient arguments for using video calls. Does say a lot about the human nature.

Hopefully business travels will be reduced from now on. Saves time and money, and is good for the environment. Travel should be mostly for leisure like going on vacation or getting back home to spend time with your family when you live abroad.
I only seldom meet my customers, maybe once a year. Nowadays you can easily share your screen and have a video call, why waste time stuck in traffic or on public transportation to reach your customer's HQ?
Score: 4 Votes (Like | Disagree)

The simple answer to that is that not everything can be moved online.

In the case of Apple, their executives frequently travel to China to ensure that the proper processes are adopted when manufacturing their products. This is not something which can be monitored online via a webcam.

Some things are still better done in person.

Apple works with hardware and secrecy is really important, I wouldn't take them as an example.
I mean some business travel does have sense, but not everything. A lot of people are working from home these days especially here, and work gets done. Do we all need to commute to the office every single day? I say no. Do we need to attend in person to every single meeting? Not at all
Score: 2 Votes (Like | Disagree)