Apple this week premiered its upcoming original film "The Banker" at a special event at the National Civil Rights Museum in Memphis, Tennessee, with stars Samuel L. Jackson, Anthony Mackie, and Nia Long in attendance. 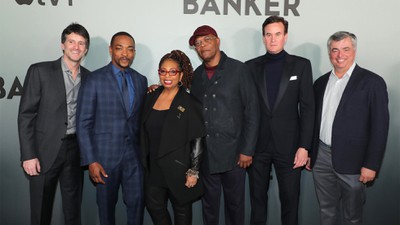 Inspired by true events, Apple says "The Banker" centers on revolutionary businessmen Bernard Garrett (Mackie) and Joe Morris (Jackson), who "devise an audacious and risky plan to take on the racist establishment of the 1960s by helping other African Americans pursue the American dream."

"The Banker" will premiere in select theaters in the U.S. on March 6, and will become available to stream on Apple TV+ on March 20.

BigSmurf
Apple does not have much content yet, but I like that they put real effort in whatever content they create/subsidise. Within a year it will become compelling to pay for.
Score: 6 Votes (Like | Disagree)

Apple does not have much content yet, but I like that they put real effort in whatever content they create/subsidise. Within a year it will become compelling to pay for.

Yep Apple seem to be going with quality over quantity.
Score: 3 Votes (Like | Disagree)

There's so much fluff in Netflix and I can rarely find a tv show I want to watch when I search. I'd rather AppleTV+ be more like HBO that produces its own content and all the shows and movies on the platform have an Apple stamp of quality.

Plus with Netflix exhibition contracting, if you don't make time to finish a series promptly you can end up discovering it's not around to finish watching when you do finally make time. Ugh.
Score: 3 Votes (Like | Disagree)

Yep Apple seem to be going with quality over quantity.

That is refreshing to me. I was burnt out from streaming TV originals because of Netflix's slash and burn approach of putting out endless mediocre content that looked exciting at first blush, but ended up being slow burn mediocrity once you dug into the season.

I got burned on so many shows that let me down that I stopped having the desire to take a chance on new series. So far Apple is maintaining my trust in their content quality, and I'm very excited to have new shows I look forward to watching. (The only real letdown on Apple TV+ has been Truth be Told for me. But a 9 out of 10 ratio quality track record is so far superior than the 5 out of 20 record I experienced on Netflix).
Score: 2 Votes (Like | Disagree)

Besides what you mentioned, my other problem with Netflix is they’ll cancel shows after 2 or 3 seasons (without wrapping them up) since more new shows incentivizes new subscribers far less then continuing content. There’s exceptions to this like Stranger Things, but they’ve cancelled a lot of well received shows like Santa Clarita Diet.

I was really skeptical about Apple getting into this space but have been enjoying their content and have been proven wrong.I’ve enjoyed Servant, Dickinson and the first two episodes of See.

I just finished watching Mythic Quest: Raven's Banquet and was pleased to see it was already renewed before it was even released. That show's plot and characterization developed really well, and left a bunch of threads to build on next season.
Score: 2 Votes (Like | Disagree)
Read All Comments

Friday June 11, 2021 2:32 pm PDT by Juli Clover
macOS Monterey makes several improvements to password management, positioning iCloud Keychain as an ideal password service to replace third-party services like Lastpass and 1Password. In System Preferences, there's a new "Passwords" section that houses all of your iCloud Keychain logins and passwords so they're easier to get to, edit, and manage. There's a similar Passwords section that's...
Read Full Article • 206 comments