Apple CEO Tim Cook visited Birmingham, Alabama yesterday, and while there, he did an interview with Fox Business. Portions of the interview where Cook discussed the coronavirus were shared yesterday, but now the entire 10 minute interview has been released. 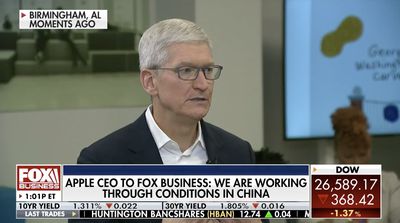 Expanding on his comments about the coronavirus, Cook says that things are progressing as expected in terms of "bringing things back," but it will take some time. "By and large, I think this is a temporary condition, not a long-term kind of thing. Apple is fundamentally strong, and that's how I see it," Cook said.

Cook said that he's not sure whether the coronavirus will continue to have an impact on Apple's sales beyond the March quarter. "We're still in February and there's reason for optimism, but we'll see," he said. Focus has shifted from China to South Korea and Italy, and Cook said he believes it's important to see "what happens there and whether something new comes out of that."

On the topic of stock fluctuations due to the coronavirus, Cook had this to say:

I don't really focus on the short term in relation to the market. I think for me, and the way we run the company, we work towards the long-term and I see no long-term difference between what was happening four weeks ago versus what's happening today.

Cook was asked whether Apple is working to move more of its supply chain outside of China, and Cook said, as he often does, that Apple devices have components from around the world. In China specifically, Cook said Apple focuses on the resilience of the supply chain, not the disaster itself.

The question for us after we get on the other side will be 'Was the resilience there or not, and do we need to make some changes?' My perspective sitting here today is that if there are changes, you're talking about adjusting some knobs, not some kind of wholesale fundamental change.

Cook also talked about how he manages his relationship with Donald Trump and whether his efforts to engage with the Trump campaign have caused employee backlash.

I try to do what I say and say what I do. My perspective is engagement is always best because just standing on the sideline and yelling doesn't accomplish anything but polarization.

Cook touched on a few other topics of discussion, such as Apple's plans to open retail stores in India and Apple's focus on policy. The full interview can be watched over on Fox Business.

Trillions of dollars disappeared in 3 days over the pandemic scare drummed up by media outlets desperate for viewership to sell ads. Their dependency on clickbait headlines may have jumpstarted the looming recession because the world runs off a phony credit system.

Good on Tim Cook to try and restore some calm. Hopefully people will settle down a bit and look at these problems for what they are.

I see the right wing propaganda machine's efforts to blame this on the media are in full effect now. The artificially high stock market tanking is the thing that scares the 1% more than anything in the world.

China shutting down everything as a result of the outbreak, resulting in log jams in the supply chain and manufacturing, is the cause of all this.
Score: 10 Votes (Like | Disagree)

Trillions of dollars disappeared in 3 days over the pandemic scare drummed up by media outlets desperate for viewership to sell ads.

That narrative is a non-starter because we can all see the fatalities and the high infectiousness of it. This may not be the Black Death but it’s shaping up to be the worst pandemic since 1918. No amount of Trump spin is going to change that.

He should just own it and do his job effectively, stop deflecting on the media and whining about his persecution complex. This isn’t the time for that.
Score: 9 Votes (Like | Disagree)

Sadly, that’s the only way some people can feel good about themselves
Score: 8 Votes (Like | Disagree)

Trillions of dollars disappeared in 3 days over the pandemic scare drummed up by media outlets desperate for viewership to sell ads. Their dependency on clickbait headlines may have jumpstarted the looming recession because the world runs off a phony credit system.

Good on Tim Cook to try and restore some calm. Hopefully people will settle down a bit and look at these problems for what they are.

Yeah, tens of thousands of infections, thousands of deaths, and large-scale quarantines and lockdowns and shutdowns are totally the fault of the mEdiAa.
Score: 6 Votes (Like | Disagree)

miketcool
Trillions of dollars disappeared in 3 days over the pandemic scare drummed up by media outlets desperate for viewership to sell ads. Their dependency on clickbait headlines may have jumpstarted the looming recession because the world runs off a phony credit system.

Good on Tim Cook to try and restore some calm. Hopefully people will settle down a bit and look at these problems for what they are.
Score: 6 Votes (Like | Disagree)

The State of California only has 200 kits on hand. If you don't test, the disease doesn't exist, right?
Score: 5 Votes (Like | Disagree)
Read All Comments