A video featuring an alleged "iPhone 9" aka "iPhone SE 2" or low-cost ‌iPhone‌ surfaced on TikTok today, sparking discussion that this is the design of the affordable $399 device that Apple will release in the next couple of months. 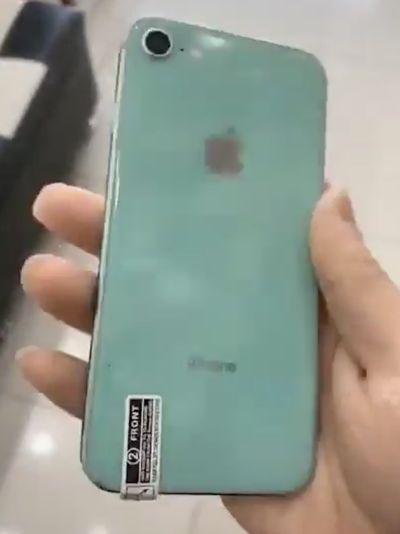 The ‌iPhone‌ in the image features thick top and bottom bezels, a Touch ID Home button, and a seafoam green color, but notably, it also has an ‌iPhone‌ 4-style design, which is not at all in line with current rumors.

Everything we've heard about the low-cost ‌iPhone‌ suggests it's going to be physically identical to the ‌iPhone‌ 8 but with an upgraded A13 processor, which makes sense given its price tag.

Rumors suggest Apple is going to price the device at $399, and at that price point, it's unlikely Apple is putting development resources into an entirely new device design like the one that's depicted here.

The ‌iPhone‌ in the image is likely a modified ‌iPhone‌ 8 or similar that has a custom casing installed. There are custom casings like this available for those who want to change the design of their older iPhones, and that's what we're probably seeing.

As mentioned before, we're expecting the new low-cost ‌iPhone‌ to look identical to the ‌iPhone‌ 8, but with upgraded internals. It will be similar to the ‌iPhone SE‌, which adopted Apple's ‌iPhone‌ 5 design with more modern components.

Rumors suggest that the new low-cost ‌iPhone‌ is going to launch in the first half of 2020, with Apple said to be planning an event for March 31. If there is indeed a March 31 event where the new ‌iPhone‌ is shown off, we can expect a launch to follow on April 3.

Update Feb 20: Forum member primarycolors has discovered an aftermarket casing for an ‌iPhone‌ 8 that appears to match the one seen in the video.

yossi
i actually hope this leak is legit. I love the SE style frame
Score: 12 Votes (Like | Disagree)

mistsate86
Probably fake but, Apple, please give us those squared-off edges like 4/5/SE and new iPads!!!
Score: 8 Votes (Like | Disagree)

SDJim
PLEASE flatten the edges! This has me so hopeful!!!! #justiceforiPhone4
Score: 7 Votes (Like | Disagree)

primarycolors
Case closed! It’s an aftermarket housing for iPhone 8. Found the link to buy it:
https://www.phonefixparts.net/product/squarish-housing-for-iphone-8-8-plus-mint/

Rigby
"You're holding it wrong". ?

I doubt it's real, but I'd love that design. The flat edges made the iPhones 4 and 5 much easier to hold than today's slippery soap bars.
Score: 6 Votes (Like | Disagree)
Read All Comments

Sunday January 16, 2022 3:37 pm PST by Joe Rossignol
A bug in WebKit's implementation of a JavaScript API called IndexedDB can reveal your recent browsing history and even your identity, according to a blog post shared on Friday by browser fingerprinting service FingerprintJS. In a nutshell, the bug allows any website that uses IndexedDB to access the names of IndexedDB databases generated by other websites during a user's browsing session....
Read Full Article • 221 comments