The refreshed version of the app features a new Search button right on the Home screen that can be used to look up any artist, song, or song lyric. 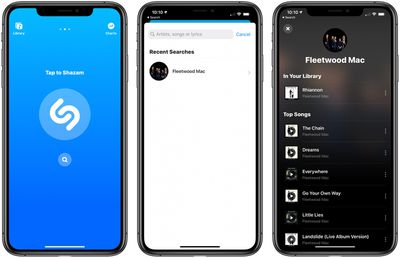 Got a song on your mind? You can now tap the new Search button on the home screen to search for any artist or song. Can't remember the name of it? Try searching with lyrics instead!

The camera button was used for a visual feature that allowed Shazam users to scan images with a Shazam camera logo or a QR code. When the "See It, Shazam It" feature was released, Shazam had partnerships with Disney, Sports Illustrated, the WSJ, and more.

The camera functionality dates back to 2015, prior to when Apple acquired the Shazam app. It's likely that all of the prior partnerships Shazam had with outside companies have expired, leading the camera technology to become outdated.

The prior Shazam camera interface
Tapping on the new search icon that replaces the camera icon opens up a dedicated search interface where content can be searched for and then played right in the Shazam app for those who have Apple Music. Other app functionality, such as the library of saved Shazam songs and the top charts remains unchanged.

When Apple purchased Shazam in 2018, all of the ads in the main Shazam app were removed, making it essentially identical in functionality to Shazam Encore. For some reason, though, Apple never made the Encore app free to purchase.

There's no point in downloading Shazam Encore if you have the standard Shazam app, and we wouldn't be surprised to see it discontinued in the future. Shazam and Shazam Encore can both be downloaded from the App Store for free.

I’ve been using Shazam Encore for ages and just installed the regular Shazam. Just to see what would happen. History syncs over just fine the second you login with your Shazam account. Obviously you need to have that enabled on Shazam Encore first. Shazam won’t import your history directly from the Shazam Encore app. Which makes sense I guess with iOS apps being sandboxed and all.
Score: 3 Votes (Like | Disagree)

My thinking considered that Shazam Account takes care of syncing history. I have been using that sync feature for some time now. So, what am I missing here?

I used to be on Encore, then when Apple bought Shazam and made it ad-free, and suggested that Encore will no longer be supported, I moved to Shazam. I did not lose any history.
Score: 2 Votes (Like | Disagree)

Gsmaniac
I always struggle to remember how to find songs that I’ve shazamed via Siri. It’s poorly integrated. They need to do a rethink.
Score: 2 Votes (Like | Disagree)

It is bizarre. They state clearly that Encore version is not supported any longer, and yet they go and make it free to download. I do not know why don't they simply remove it and keep the standard version.

Shazam Encore for me since January 2014. I used to enjoy seeing not just the tunes that I previously Shazamed but also where I was when I did so.

Not only does this not get recorded anymore, my oldest Shazams no longer display that information.

macintoshmac
It is bizarre. They state clearly that Encore version is not supported any longer, and yet they go and make it free to download. I do not know why don't they simply remove it and keep the standard version.
Score: 1 Votes (Like | Disagree)
Read All Comments

Thursday September 29, 2022 12:38 pm PDT by Juli Clover
Tony Blevins, Apple's vice president of procurement, is set to depart the company after he made a crude comment about his profession in a recent TikTok video, reports Bloomberg. Blevins was in a video by TikTok creator Daniel Mac, who was doing a series on the jobs of people he spotted with expensive cars. After seeing Blevins in an expensive Mercedes-Benz SLR McLaren, Mac asked Blevins what ...
Read Full Article • 666 comments