Apple Card users are now able to export their transaction data in an OFX file format for use with third-party financial apps such as Quicken and Mint, as noted by Kyle Seth Gray. The option shows up when a monthly statement is available.

The exporting feature first rolled out last month, but only with CSV file support. 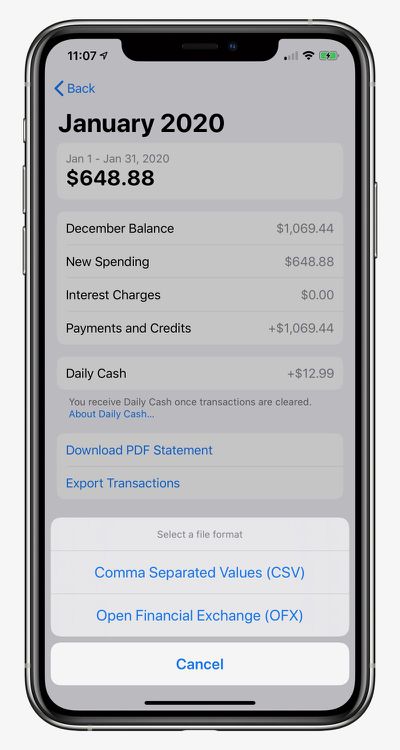 Apple launched its credit card in the United States in August. Key features include color-coded spending summaries in the Wallet app, no fees beyond any applicable interest, and up to three percent cashback on purchases paid out daily.

To apply for an ‌Apple Card‌, simply open the Wallet app on an iPhone running iOS 12.4 or later, tap the plus button in the top-right corner, and follow the on-screen steps. The process takes just a few minutes, and if approved, your digital ‌Apple Card‌ will be ready for purchases immediately. A physical titanium-based Apple Card is also available for use at retail stores that do not accept contactless payments.

bladerunner88
Cant seem to import into Banktivity Vs 5.6.12. I've created a new account but get the following when trying to import the OFX File:

Received this from IGG Support:

Thank you for contacting IGG Software Support. Is this an OFX file downloaded from Apple Card? If so, we have already received reports of this issue. The problem is the OFX file is missing many tags required by the OFX specification. The OFX file will not be able to be imported until Apple (or Goldman Sachs) adds all tags properly, in accordance to the OFX specification. We have brought this to Apple's attention and they hope to have this corrected soon.

ajfahey
I still won’t be using my Apple Card much at all until downloads are supported in “One Step Update”. OFX just isn’t near good enough for me the change my mind. I have two dozen accounts in my Quicken file. Using OFX to update even one of them is one nuisance too far and I have plenty of other credit cards to turn to.
Score: 3 Votes (Like | Disagree)

ep2002
This is great news! Exporting options is what was keeping me from fully utilizing my  Card because of my financial work flow with the Banktivity software. The CSV was a “clunky” first step for a solution but now with OFX support I’m excited to use my  Card as my main primary credit card.
Score: 2 Votes (Like | Disagree)

deramo
Correct me if I'm wrong, but Mint.com doesn't allow you to import transactions. You can manually add transactions one at a time to an existing account if they are missing however it doesn't allow you set up a "Blank" account that isn't linked to a financial institution.
Score: 2 Votes (Like | Disagree)

Exactly, until I can import these to Mint directly I will pass on the Apple card
Score: 2 Votes (Like | Disagree)
Read All Comments