Health records firm Epic Systems and some 60 client hospitals are objecting to a proposed U.S. government policy that would make it easier for patients to share medical records data with apps, an initiative supported by Apple and other tech companies (via CNBC). 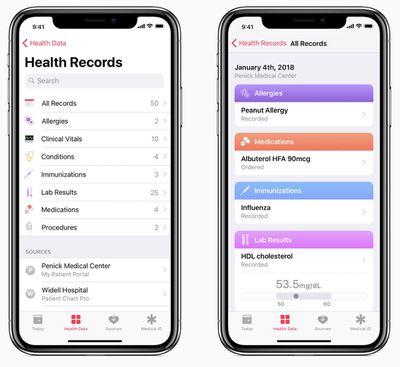 Proposed by the Department of Health and Human Services (HHS) in 2019, the modified data sharing rules would allow patients to share private clinical data from their healthcare providers and make it more accessible to health apps via APIs.

Currently, patients often have difficulty trying to obtain their information, with clinical data stored on physical media and processed through medical record software marketed to hospitals by the likes of Epic. According to one report, an Epic installation can cost upwards of $1 billion for a major health system to implement.

Yet in a letter to the HHS Secretary Alex Azar, Epic and signatories argue that the pending initiative on interoperability will be "overly burdensome on our health system and will endanger patient privacy."

Instead, Epic's letter recommends changes to the proposed rules, including extra clarity around health information related to family members and a longer timeline for the "development of new technology required by the rule," up from 1 year to 3 years.

"While we support HHS' goal of empowering patients with their health data and reducing costs through the 21st Century Cures Act, we are concerned that ONC's Proposed Rule on interoperability will be overly burdensome on our health system and will endanger patient privacy. Specifically, the scope of regulated data, the timeline for compliance, and the significant costs and penalties will make it extraordinarily difficult for us to comply."

A spokesperson for HHS told CNBC that it had received the letter. "We appreciate all stakeholder feedback as we continue to finalize the rules," they said. "Our ultimate goal is to ensure that patients are able to easily access their electronic medical records."

Some health IT experts told the news outlet that the letter has not been signed by some of the largest health systems in the Epic ecosystem, and called their absence "significant."

"Their absence represents a thundering silence," said David Brailer, the first National Health Information Technology Coordinator, appointed by George W. Bush. "Many health systems are quietly discussing how the data access and data fluidity actually benefits them in the long-run."

Apple, Microsoft and Google recently joined a call with non-profit Carin Alliance to discuss ways to get the rule finalized. As noted by CNBC, the tech firms favor the rules, partly because greater interoperability between systems that store medical records could help them move into the $3.5 trillion health care sector.

Apple has progressively worked to break into the health industry in recent years. At the beginning of 2018, the company launched a Health Records service to increase the portability of health records and make them available across participating hospitals and clinics. The idea was to allow patients to download their health records to iOS devices and then easily share them with other practitioners.

By August of the same year, Apple's Health Records feature allowed iOS users to access their medical records from more than 75 different hospitals and medical providers in the United States.

SoundJudgment
Epic! Sit down! Shut up!! Nobody likes you!
Score: 23 Votes (Like | Disagree)

Crowbot
Data is a jewel in the patient data industry. And the data companies don't want to share the wealth. Not for free, that is. Most large hospital systems (including the ones using EPIC, the largest company, I believe) have a means of giving the patient a data package in PDF format. This sounds like economic resistance to me.
Score: 19 Votes (Like | Disagree)

Frign
The medical industry is scared of losing "customers". You can't make money with medication and surgeries to remedy long-term illnesses (which makes up the majority of their income) when many issues are detected early.
Score: 18 Votes (Like | Disagree)

For crying out loud...This screams against all things HIPPA stood for!
Especially when data breaches are still common place.
Its no wonder these companies resist.

This has nothing to do with HIPPA. The patient can share whatever medical history of theirs they want.
Score: 17 Votes (Like | Disagree)

For crying out loud...This screams against all things HIPPA stood for!
Especially when data breaches are still common place.
Its no wonder these companies resist.

Not really. HIPPA protects what others can do with your data. You have every right to your personal data and if you want to keep it stored locally or have it easily accessible, you have the right to do so. This is purely a money play and control play by Epic. If patients hold and maintain their own medical info, they are less reliant on doctors to pull it and send it to them. Trust me, this is a painful process. Consider a snowbird. They need their medical records easily accessible in two separate areas, most likely with health systems that are not connected. Waivers aside (which should not be required as you can share PHI between two Covered Entities without a contract for treatment, payment and healthcare operations), it should not take an act of congress to have one doctor share your health records with another.
Score: 14 Votes (Like | Disagree)

Marzzz
Epic is SKYNET. It made a few people in Madison billionaires, and created havoc, confusion and dismay among hospitals across the US.

I am a physician, and I still use paper charts. My colleagues envy me, and my patients love that I pay attention to them instead of a laptop.

If medical records are to be electronic, they need to be patient-centric; practitioners/providers/etc. should then be able to use a license to securely access the patient's database. Each entity having their own system that can't interact with each other is at best a disaster, a huge waste of time and money, and a major source of "physician burnout." I have seen electronic notes go on for 18 pages, crammed with utterly useless BS. My average office visit note is two pages, legible (using Dragon Dictate Medical for Mac- thanks for dropping support for that, Nuance!), and is quite comprehensive.

Hey Apple, I would love to consult with you....
Score: 10 Votes (Like | Disagree)
Read All Comments