According to Iger, Disney+ has "exceeded" the company's "greatest expectations." As The Verge points out, Disney+ has surpassed the number of HBO Now subscribers and is gaining on Netflix's U.S subscriber count, which is at 61 million as of January 2020. 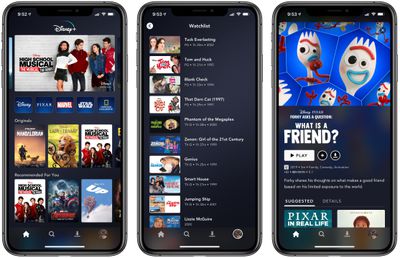 There's no direct comparison to Apple TV+ given the fact that Apple hasn't released subscriber numbers and has a large number of non-paying customers as the company has been providing everyone who has purchased an Apple device since September with a free year of ‌Apple TV+‌ service.

Disney+ ran promotions for discounted service for multiple years, marking the service down to the equivalent of $3.99, and has provided free Disney+ access to Verizon subscribers. Outside of free trial members and Verizon users, customers with access to Disney+ are paying for it, unlike most ‌Apple TV+‌ subscribers at this time.

Extrapolating from Apple's Q1 earnings report, Bernstein Research analyst Toni Sacconaghi recently suggested that ‌Apple TV+‌ has a low adoption rate, even among those who can get it for free. He speculated that this could be due to disinterest from consumers given the limited amount of content on ‌Apple TV+‌ or Apple's failure to promote it.

It's not clear if Sacconaghi's estimates are correct, as figures from Ampere Analysis shared by The Wall Street Journal indicated Apple could have as many as 33.6 million subscribers, though most of those have free access.

Disney+ has a major edge over ‌Apple TV+‌ because Disney+ has an established catalog of content along with many popular Star Wars and Marvel franchises. "The Mandalorian," the key show Disney+ premiered with, received more attention than any of ‌Apple TV+‌'s launch shows, including "The Morning Show," "Dickinson," "See," and "For All Mankind."

‌Apple TV+‌ may be able to catch up to Disney+ at some point in the future because Apple does have a huge subscriber base to appeal to given the number of iPhones and other Apple devices in the wild, but it will be years before Apple is able to match Disney's content offerings.

Unity451
Aside from the fact that Disney+ has such a backlog of titles and top tier franchises... I just appreciate how everything is family friendly. I'm so sick of all the TV-MA content that is getting produced. So many good show concepts out there from other platforms that go too deep into the smut because they think they need all that garbage to make it an appealing show/movie.
Score: 43 Votes (Like | Disagree)

Polymorphic
I have a free year of AppleTV+. And I still haven't even bothered to set it up or log in.

triangletechie
The title is incorrect. It suggests Apple TV+ is a competitor.
Score: 21 Votes (Like | Disagree)

buttongerald
Myself and my wife have had Disney+ since day one with no regrets. My wife loves older Disney films and I love having access to all seasons of The Simpsons.

As for Apple TV+? Zero interest in that.
Score: 16 Votes (Like | Disagree)

fmcshan
It will be interesting to see how many customers will renew their Apple TV+ subscription after the free one year promo trial.
Score: 15 Votes (Like | Disagree)

gplusplus
My wife and I happily pay for Disney+ and it works on all our devices. We got multiple “free” trials of Apple TV+ and we haven’t used it even once, and we STILL feel like we want some kind of refund, just for the principle of it not being supported on LG WebOS *and* they haven’t updated the Apple TV hardware in ages.
Score: 12 Votes (Like | Disagree)
Read All Comments