The Unicode Consortium today announced the finalized Emoji 13 characters that will be introduced alongside Unicode 13 in 2020, and which will eventually be adopted by Apple for use on the iPhone, iPad, Macs, and more.

There are a total of 62 new emojis included in the Emoji 13 update, such as smiling face with tear, polar bear, seal, bubble tea, pickup truck, fondue, teapot, magic wand, beetle, and piñata.

Broken down by category, here are all of the new emoji as listed by Emojipedia:

The update also includes 55 gender and skin-tone variants, along with new gender-inclusive emojis that can be used as an alternative to gendered versions, such as person with veil and person with tuxedo rather than the current woman/man options. 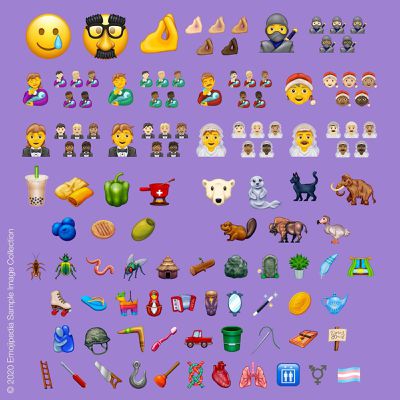 Apple will adopt the new Unicode 13 emoji characters at some point in 2020, likely in the fall as an update to iOS 14. Apple last year introduced Unicode 12 emojis in the iOS 13.2 update that was released in October.

This reminder of course to be ignored by those who hate emojis, people who coincidentally are least empathically minded, having the hardest time being understood and understanding others who don't think the way they do on the internet.
Score: 42 Votes (Like | Disagree)

yadmonkey
Just give me back my gun.
Score: 26 Votes (Like | Disagree)

I like that emojis are getting more diverse and accepting, but why include such a niche emoji like "man in veil" when we don't have something useful (and arguably more relevant) like a condom emoji? I'm a huge advocate for safe sex, and it's driving me crazy that we still don't have a condom emoji especially in an age of Tinder and other dating apps.

You can combine the helmet and eggplant emoji maybe?
Score: 25 Votes (Like | Disagree)

Kabeyun
Also, the usual reminder that Apple does not invent emoji’s. They are just one of many members of the Unicode Consortium.

And also a reminder that Apple can do things besides work on emoji‘s, to all of you whose pet issue has not yet been implemented.
Score: 21 Votes (Like | Disagree)

nattK
I like that emojis are getting more diverse and accepting, but why include such a niche emoji like "man in veil" when we don't have something useful (and arguably more relevant) like a condom emoji? I'm a huge advocate for safe sex, and it's driving me crazy that we still don't have a condom emoji especially in an age of Tinder and other dating apps.
Score: 18 Votes (Like | Disagree)
Read All Comments