Flexibits today is launching version 3.0 of its popular Fantastical calendar app, bringing a host of improvements across all platforms including Mac, iPhone, iPad, and Apple Watch. Along with all of the feature updates, Fantastical is transitioning to a premium subscription model that unlocks access across all devices and will provide continued feature additions and improvements on an ongoing basis.

With the new updates to the Fantastical apps, everything has been unified across the various platforms, so users will essentially find feature parity on all of their devices. An all-new design brings a full-screen calendar window, support for native OS features like Today widgets, action and share extensions, and Handoff, and much more.


I've had a chance to try out the new Fantastical, and I've come away impressed with the sleek look, slick management of significant amounts of information, and of course the natural language parsing Fantastical has been known for that lets you easily create events and tasks by simply typing a few words. Among the key additions in Fantastical 3.0:

- AccuWeather integration displays small weather icons in relevant places, bringing forecasts right into your calendar so you can see what the weather is going to be like for your various events, even taking into account event locations. 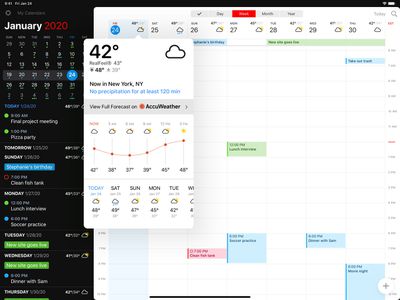 Fantastical for ‌iPad‌ with AccuWeather MinuteCast forecasts and RealFeel temperatures
- Calendar sets let you quickly manage your various calendars and tasks, allowing you to toggle multiple calendars with a single click and even change displayed calendars based on your location. Interesting Calendars is another new feature powered by SchedJoules that lets you subscribe to calendars for holidays, your favorite sports teams and TV shows, and more. Subscribing to a sports team, for example, will add entries for upcoming games to your calendar, and each game entry will update at its conclusion with box scores and even highlight links to let you easily follow your favorite team.

Fantastical for ‌iPhone‌ with day ticker view, "interesting calendars", and week view
- Meeting proposals are particularly useful for groups, letting you specify multiple time options in a calendar event invitation and have each invitee choose times that work for them. Once a unanimous time has been selected, the event can be automatically scheduled in on users' calendars, or it can be manually set by the organizer.

- Tasks now have a prominent home alongside calendars in Fantastical, and integration with Todoist, Google Tasks, and iCloud helps keep everything in sync.

Fantastical for Mac dark mode
Other features in Fantastical 3 include one-click creation of Zoom or Google Hangout meetings right from events, the ability to attach files and photos to scheduled events, event templates for one-touch creation of frequent events, and custom alert sounds for events.

Fantastical has long been available across Apple's various platforms, but each app has been a standalone purchase, and that's changing with Fantastical 3.0's shift to a subscription model. Subscriptions have long been controversial with users, but Flexibits has made a strong effort to justify the change by unifying everything under a single subscription that unlocks all apps and keeping pricing to a reasonable $4.99 per month or $39.99 per year. With the new subscription model, Flexibits will be able to deploy new features on a more regular basis rather than holding them to bundle for the next major paid update.

For those who don't want to pay for a subscription, there is a new free mode available for Fantastical, but many users will find it limited enough that they'll want to consider a paid subscription, for which there's a 14-day free trial. All users will also need to set up a free Flexibits account if they wish to sync calendars.

Fantastical 2 users who don't wish to convert to a subscription won't find themselves completely out of luck, as they'll be able to download the new apps and maintain access to all of the features and functionality they've had under Fantastical 2 on the platforms where they previously purchased it, plus a few of the new features as well as ongoing bug fixes and technical support.

Fantastical version 3.0 is rolling out now as an updated version of the existing Fantastical 2 ‌iPhone‌ app [App Store], which is now a universal binary supporting ‌iPhone‌, ‌iPad‌, and Apple Watch. (If you're an existing user of Fantastical 2 for ‌iPad‌, you'll need to download the new universal version, as the iPad-only app is being discontinued, but the transition should be seamless.) The updated version of the Mac app can preferably be downloaded directly from Flexibits, but it's also available on the Mac App Store.

1144557
Great, another subscription for a mundane limited task app. I mean how many times was 2.0 REALLY updated with features to warrant paying $5 monthly or $40/year for a calendar? It's not like a calendar app can expand much over time to warrant a continuing cost. At least with email, I dont agree with the model, but get it that servers cost $$$ monthly and to have a business model you need to make constant money. But a calendar app? No thanks.

I know many say that $5 isn’t much. Just skip a coffee every month. Well dude, it’s not like a calendar app is the only app I have on my phone. With this new app pricing, I will soon need to get another job just to pay my app bills!

The feature I wanted the most was a month view. But even that was premium only. No thanks.
Score: 39 Votes (Like | Disagree)

I know many say that $5 isn’t much. Just skip a coffee every month. Well dude, it’s not like a calendar app is the only app I have on my phone. With this new app pricing, I will soon need to get another job just to pay my app bills!

The feature I wanted the most was a month view. But even that was premium only. No thanks.

Yup, everyone says but its only $x support your devs!! Until you found out you just paid over a $100 bill for an app over those years time.

Everything is subscription now, that forgo a coffee argument no longer works. The stock calendar app is still a pretty decent calendar app for free and does the same basic functions.
Score: 20 Votes (Like | Disagree)

chugg
So... what is the subscription pricing for? Are they hosting something? Or providing some sort of ongoing service?
Score: 20 Votes (Like | Disagree)

numbersyx
Staying with Version 2 until it becomes redundant and then will find another Calendar app. Subscription pricing makes no sense to me for this app.
Score: 19 Votes (Like | Disagree)
Read All Comments