Curve, the banking and payment service which connects several accounts to one smart card, today announced Apple Pay support for all users across Europe. 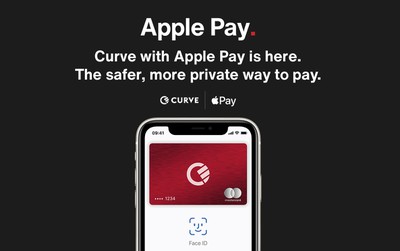 For those unfamiliar with the service, Curve is a payment card that aggregates multiple payment cards via its accompanying mobile app, allowing users to make payments and withdrawals from a single card.

In other words, you can load a Mastercard or Visa debit and credit cards to the Curve app, and spend using just the Curve Mastercard.

With ‌Apple Pay‌ support now active, the Curve card can be added to the Wallet app just like any other card, allowing it to be used via iPhone and Apple Watch anywhere that accepts contactless payments or displays the ‌Apple Pay‌ logo.

"We are thrilled to announce ‌Apple Pay‌ is here for all European Curve customers," said Diego Rivas, Curve's Head of Product-OS. "Curve's integration with ‌Apple Pay‌ is a magnificent addition to Curve's unique money management features, superbly complimenting Curve's commitment to simplifying and unifying people's financial lives and enabling even more ways for customers to pay with one of the most rewarding and feature-packed personal finance products on the market," added Rivas.

Where is it too late. Curve offers a very different service to Revolut and it’s not one or the other. Revolut for me is still just a simple and cheap way to transfer money across the globe for personal or business use.

Where people only use it to circumvent the lack of Apple Pay in their banks. That is, all my friends, and me. I don't need any other of the features these apps have. At all. Why do you think Revolut's userbase jumped right when they added Apple Pay? It's not that hard to connect the dots.

Also, this news is about Curve adding Apple Pay, FYI. All I was stating is that they won't get any new customers with this, whoever needed AP has already signed up to Revolut.
Score: 1 Votes (Like | Disagree)

nickwlker
If you have your local bank card with Apple Pay - go for it. You don't need anything extra.
If you have Revolut. With Curve - you don't need to top up the balance.
As I listed above you don't top up the Curve card, it charges you each transaction separately.
So there won't be such situations when you have on Revolut 20€, but the purchase is 20.92€ and the transaction get declined due to insufficient funds on Revolut card, since it will be directly connected to your real bank card.

And other feature that is useful for some people - they can withdraw 200£/mo for free in any ATM in the world without a FX fee, even from foreign cards and from credit cards, since it acts like regular INTERNET payment.
Score: 1 Votes (Like | Disagree)
Read All Comments