Apple CEO Tim Cook is in Davos, Switzerland for the World Economic Forum conference and he plans to attend a breakfast with U.S. President Donald Trump, reports Bloomberg.

Cook and IBM CEO Ginni Rometty will brief Trump on a new campaign designed to highlight the multiple ways to get an education. 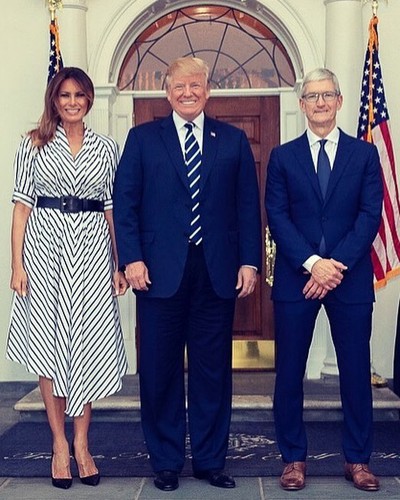 ‌‌Tim Cook‌ and Melania and Donald Trump‌ in August 2018
Cook has attempted to have a cordial relationship with Trump, and recently took Trump to tour Apple operations in Austin, Texas, but there have been tensions between the two due to an ongoing trade dispute with China and more recently, Apple's refusal to unlock the iPhones used by Florida shooter Mohammed Saeed Alshamrani.

Ahead of the breakfast with Trump, Cook on Tuesday met with the prime ministers of Finland, Spain, and Croatia, but it's not known what was discussed.

calvin2006
Good. The cancel culture is a cancer. Even people with differences need to learn to respect each other and get along.
Score: 19 Votes (Like | Disagree)

Jeremy1026
From a business perspective I get it, but from a personal perspective, I can't understand how Cook puts up with him.
Score: 18 Votes (Like | Disagree)

russell_314
This just shows intelligent people can put their political differences aside and get along. Both Cook and Trump have excellent business sense and this shows by their success.
Score: 16 Votes (Like | Disagree)

DNichter
Trump is a child, so it is easy to manipulate him. I would imagine just for the headline of working with Apple, Trump will bend to whatever Apple needs. From a business perspective, this of course makes a ton of sense, but disappointing to see Apple giving the green light to a racist/fascist like Trump. I suppose it's the way the world works though, Apple is no different than the rest.
Score: 14 Votes (Like | Disagree)

From a business perspective I get it, but from a personal perspective, I can't understand how Cook puts up with him.

I don’t think Trump would be the way the media paints him in reality.

This photo would be a great advertisement for a tailoring company...

Could Tim's smile be any more fake in this picture?

Dentures is likely the reason lol
Score: 10 Votes (Like | Disagree)
Read All Comments

Monday August 2, 2021 9:34 am PDT by Juli Clover
Apple is preparing for a slew of fall product launches according to new filings that showed up today in the Eurasian Economic Commission database. There are listings for new Mac and Apple Watch models, all of which have previously unknown model identifiers that indicate that they're upcoming devices. There are six new Apple Watch identifiers, including A2473, A2474, A2475, A2476, A2477, and...
Read Full Article • 107 comments

Monday August 2, 2021 8:00 am PDT by Sami Fathi
The iPhone 13 is widely expected to come with Wi-Fi 6E capabilities, and while it may seem rather nuanced to the average consumer, with only improved speeds and being "up to date" in the realm of Wi-Fi technology, it's actually a fairly significant improvement, laying the groundwork for much of what we know the future holds. To truly understand Wi-Fi 6E, MacRumors sat down for an exclusive...
Read Full Article • 60 comments

Monday August 2, 2021 3:22 am PDT by Tim Hardwick
YouTube is piloting a new cheaper subscription tier in Europe called "Premium Lite," which offers ad-free viewing minus YouTube Premium's other features. First spotted by a user on ResetEra and subsequently confirmed by Google, the "Lite" plan means users who aren't interested in offline downloads or background playback can still enjoy YouTube videos on web and mobile app without being...
Read Full Article • 121 comments