United States President Donald Trump this afternoon weighed in on a disagreement between Apple and the FBI, calling on Apple to "step up to the plate" and "help our great country" by unlocking the iPhones used by Florida shooter Mohammed Saeed Alshamrani.

Trump said that the U.S. is "helping Apple all of the time" but Apple refuses to "unlock" smartphones used by "killers, drug dealers and other violent criminal elements." 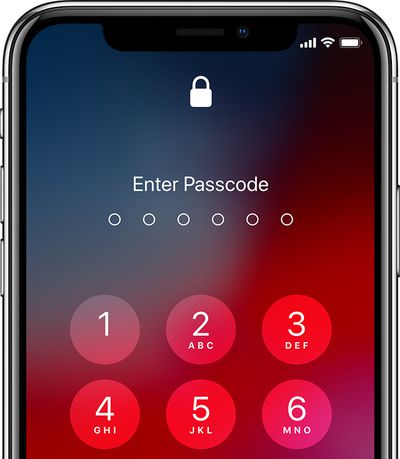 The Twitter rant comes following a request yesterday from U.S. Attorney General William Barr, who asked Apple to unlock the iPhone 5 and iPhone 7 used by Alshamrani. Barr complained that Apple had provided "no substantive assistance" and said that it is critical "that the public be able to get access to digital evidence."

We are helping Apple all of the time on TRADE and so many other issues, and yet they refuse to unlock phones used by killers, drug dealers and other violent criminal elements. They will have to step up to the plate and help our great Country, NOW! MAKE AMERICA GREAT AGAIN. — Donald J. Trump (@realDonaldTrump) January 14, 2020

Apple previously said that it had provided all of the information in its possession (such as iCloud backups) to the FBI earlier in the month after the FBI asked for assistance obtaining the shooter's data. Law enforcement officials are not satisfied with the iCloud data, however, and want Apple to provide a way to unlock the shooter's iPhones, which is not possible without a backdoor into the software.

After Barr's request, Apple issued another statement and provided further detail on the data that has been provided, as well as once again stating that there is "no such thing as a backdoor just for the good guys." Apple's full response to Barr that ultimately triggered Trump's tweet is below:

We were devastated to learn of the tragic terrorist attack on members of the US armed services at the Naval Air Station in Pensacola, Florida on December 6th. We have the greatest respect for law enforcement and routinely work with police across the country on their investigations. When law enforcement requests our assistance, our teams work around the clock to provide them with the information we have.

We reject the characterization that Apple has not provided substantive assistance in the Pensacola investigation. Our responses to their many requests since the attack have been timely, thorough and are ongoing.

Within hours of the FBI's first request on December 6th, we produced a wide variety of information associated with the investigation. From December 7th through the 14th, we received six additional legal requests and in response provided information including ‌iCloud‌ backups, account information and transactional data for multiple accounts.

The FBI only notified us on January 6th that they needed additional assistance -- a month after the attack occurred. Only then did we learn about the existence of a second ‌iPhone‌ associated with the investigation and the FBI's inability to access either ‌iPhone‌. It was not until January 8th that we received a subpoena for information related to the second ‌iPhone‌, which we responded to within hours. Early outreach is critical to accessing information and finding additional options.

We are continuing to work with the FBI, and our engineering teams recently had a call to provide additional technical assistance. Apple has great respect for the Bureau's work, and we will work tirelessly to help them investigate this tragic attack on our nation.

The current dispute between Apple and the U.S. government mirrors a similar incident in 2016. Apple was ordered by a federal judge to unlock the iPhone owned by San Bernardino shooter Syed Farook. Apple fought hard against the order, which was asking for backdoor access into iPhones, and explained that weakening security "makes no sense" and would create "new and dangerous weaknesses."

Apple ultimately won the dispute and the government was able to find another way to access Farook's iPhone, which may also be an option in the current situation. Bloomberg this afternoon spoke to several security researchers, including Will Strafach, who said the government could "absolutely" get into the iPhone 5 and iPhone 7 owned by Alshamrani using technology offered by Cellebrite and other iPhone cracking firms.

As in 2016, Apple is not likely to cave in to government demands because doing so would compromise the security of all iPhones. A new report from The New York Times suggests Apple is privately preparing for a legal fight while also attempting to publicly diffuse the situation.

Apple executives are said to be surprised at the case's "quick escalation" and some of the team working on the issue are frustrated that the Justice Department "hasn’t spent enough time trying to get into the iPhones with third-party tools." Apple CEO Tim Cook has put together a team handling the dispute, and the group is said to be hoping to steer the situation towards an outside resolution that "doesn’t involve the company breaking its own security."

jsmith189
Here he goes ranting without knowing what he's actually talking about once again. I thought he "knew tech better than anyone".
Score: 105 Votes (Like | Disagree)

As a policy that applies to criminals...I agree. But don't show the FBI how to do it. Do it for them and let them look. Telling them how to do it = slippery slope.

The point is Apple can’t do it. That’s how they designed it.
Score: 95 Votes (Like | Disagree)

xxray
Sacrificing the privacy of hundreds of millions of innocent [S]Americans[/S] humans across the world just for more evidence on an already convicted shooter makes no sense.
Score: 71 Votes (Like | Disagree)

GermanSuplex
Donald Dotard telling people to "step up to the plate". That's rich. Yeah, Apple, start cooperating with authorities like Trump has!
Score: 57 Votes (Like | Disagree)
Read All Comments