Disney+ to Launch in Europe Ahead of Schedule on March 24

Disney+ is coming to Europe sooner than we thought. Ireland, France, Germany, Italy, Spain, Austria, Switzerland, and the United Kingdom will now get the streaming service on March 24, Disney revealed today. 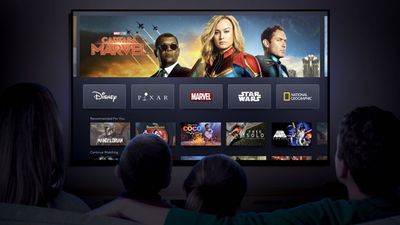 Additional Western Europe markets, including Belgium, the Nordics, and Portugal, will follow in summer 2020, said the company in a press release. Disney+ is already available in the Netherlands, where it launched as a free pilot trial back in September.

The new launch date is a week earlier than was initially scheduled. In November, Disney CEO Bob Iger said the launch date for European markets would be March 31.

Pricing has also been confirmed at £5.99/€6.99 per month, or £59.99/€69.99 for an annual subscription. Disney+ will be available on Amazon Fire devices, LG and Samsung smart TVs, Roku's streaming devices, Apple TV, iOS, Android, Xbox One, and PS4 at launch.

Users will access high-quality and commercial-free viewing, up to four concurrent streams, unlimited downloads on up to ten devices, personalised recommendations, and the ability to set up to seven different profiles, including the ability for parents to set Kids Profiles that have an easy- to -navigate, child-friendly interface to access age-appropriate content.

Over 500 feature films and over 7,500 shows will be available on the service including new original content like the critically acclaimed "The Mandalorian" and "The World According To Jeff Goldblum," along with timeless classics like "Lady and the Tramp" and the entire Pixar library.

johnyslats
Great news. Curious to see how much of the library will be available given the Sky contract and the expiry dates currently listed on NOW TV for many of the titles
Score: 6 Votes (Like | Disagree)

BvizioN
I am looking forward to it. Got Netflix, Amazon Prime, YouTube, and Disney+ soon.
I used to pay a fortune for Sky TV, stoped over 2 years ago. I hardly ever watch a live TV, just stream.
Score: 5 Votes (Like | Disagree)

dumastudetto
Too little too late.

Apple TV+ is where its at for me now. Nothing else matters.
Score: 5 Votes (Like | Disagree)

Brenster
Having had a ‘cheeky’ US Disney+ subscription since mid-December, I’ll be in on day 1 with an annual subscription for the UK Disney+ service. The Star Wars & MCU films in 4K + Dolby Vision/Atmos have been fantastic, and we’ve enjoyed the Original/Exclusive content such as the Imagineers documentary and Forky Asks A Question. Hopefully the 90s XMen animated series will come across from the US service. The £59 annual subscription is going to be a no-brainier for my Disney/SW/MCU obsessed family. Hopefully Greys Anatomy etc will also come to the UK service as NowTV is no longer worth out while without the ABC dramas and nothing much from HBO to make it worth our while.
Score: 3 Votes (Like | Disagree)

Mitthrawnuruodo
FFS, Disney... why do we (in the Nordic countries) have to wait until "Summer of 2020"?

Oh, well...gives us more time to enjoy all the Studio Ghibli films on Netflix in the mean time: https://www.theverge.com/2020/1/20/21073635/studio-ghibli-netflix-streaming-rights-acquired-global
Score: 3 Votes (Like | Disagree)

Morgenland
Let's remember: Apple had revolutionised the music business and, against the marketing strategies of the past, has pushed it through with sensible prices and concepts. Apple is now extremely unagitated and very professional. I miss nothing.
AppleTV seems just as professional to me. Apple is trying to create best entertainment.
After Apple had created this new market, copycats like Amazon etc. came along. Did they really expand the product range?
The more providers share the market, the less money is available to create good products.
In a limited market competition spoils the quality of variety.
Besides, I don't believe anyone here who claims to use Netflix, Amazon Prime, YouTube, and Disney+ , Sky TV at the same time.
Not even the unemployed have that much free time. And money.
Score: 2 Votes (Like | Disagree)
Read All Comments