In 2016, the European Commission found that Apple received illegal state aid from Ireland and forced the company to repay 13 billion euros in back taxes. Apple and Ireland are both appealing the ruling. Apple has previously expressed confidence that the ruling "will be overturned" by European courts. 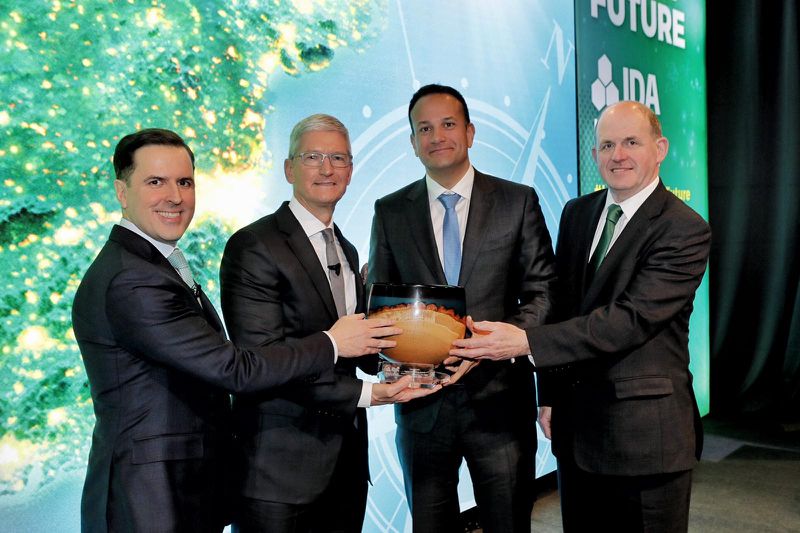 In that regard, Cook today called for global corporate tax reform, telling Reuters and others that Apple "desperately" wants the system to be fair. "It's very complex to know how to tax a multinational," he added.

"I think logically everybody knows it needs to be rehauled, I would certainly be the last person to say that the current system or the past system was the perfect system. I'm hopeful and optimistic that they will find something," said Cook, referring to the intergovernmental economic organization OECD.

What an amazing welcome back to Ireland! Thank you @Hozier for sharing your music with me, and for the chance to look around the studio. Feel free to reach out if you ever need some backup vocals. 🎶 pic.twitter.com/Opfka0j2UK

.@War_Ducks set out to create a game with fun, engaging and colorful characters, and they nailed it. Awesome to see how @NikkiLannen and her talented team in Dublin are embracing AR to take their games to the next level! pic.twitter.com/bjL15fWlPY

Celebrating 40 years of Apple in Ireland with our remarkable and growing team at Hollyhill! Your hard work and dedication to our customers and the communities we serve reflects the best of what we stand for. Here’s to the next 40! 🇮🇪 pic.twitter.com/ADiRz3yoOP


Update: IDA Ireland has issued a press release about Apple's award that includes a statement from Cook:

Ireland has been a second home for Apple for forty years and this honour is even more special for us because it recognizes the contributions of our incredible team here who work tirelessly to serve our customers around the country, and around the world. I believe deeply that our most important work together is still ahead of us, and I'm grateful to the people of Ireland for their commitment to openness, to innovation and to the cooperation that will make possible the next generation of world-changing ideas.

rmoliv
Pay your taxes and shut up just like everyone else.
Rating: 19 Votes

now i see it
Global corporate tax laws need to be reformed so we can pay less tax
Rating: 18 Votes

How stupid does Tim think people are?
Rating: 16 Votes

JRobinsonJr
The word "fair" is not relevant and I seriously wish Tim (and other super-rich people) would stop using it. There is no such thing as a "Fair" tax! Taxation is about confiscation of wealth. Regardless of which country you live in, such confiscation is both necessary and proper to fund programs required for society at large such as Infrastructure, Defense, etc.

I would also suggest that there is no such thing as a corporation paying taxes. Again, regardless of the industry or location, when a company sells a widget, part of those proceeds are used to pay taxes. Where does that money come from? The CONSUMER of the widget. When individual citizens pay taxes it comes out of their pocket. I have no mechanism to pass on taxes to someone else.

Corporate taxes, like VAT, fuel tax, permits, etc. are nothing more than ways to hide the true cost of government from the governed.

Thus, IMO, the only reasonable approach is for companies to NOT pay taxes. Let individuals pay everything directly. We're paying it anyway... just in a hidden form. If we really saw the impact of taxes on our income I suspect that a vast majority of people would quickly revolt!
Rating: 15 Votes

Pay your taxes and shut up just like everyone else.

Stop with this. They paid everything they were required to. EU *changes* the rules, and wants Apple to retroactively pay according to new rules. Would you?
Rating: 10 Votes

Stop with this. They paid everything they were required to. EU *changes* the rules, and wants Apple to retroactively pay according to new rules. Would you?

Konigi
If Tim Cook is genuine about global tax reform, I guess he's pointing to something like the prisoner's dilemma. It's difficult to pay a fair tax when your competitors don't, so you have an incentive for avoiding taxes.

But at the end, most states (and hence citizens) are losing from this game, as multinationals do not pay their fair share. Sure, if we had a complete global tax reform, our products would end up being slightly more expensive. But we would also have way more social services, perhaps even paying less taxes as citizens.
Rating: 9 Votes

Something changed. The world’s largest company doesn’t operate unnoticed for over a decade, Then one day someone stumbles over Apple’s savings and they sue them...

Either the rules changed or the government bent those rules or spent years working out a way to interpret those rules to get some of the money. Which is obviously why Apple and Ireland feel there is room for appeals.

It happens. Police and Governments realize - wow - how is there not a law for this... and they dig around for a while until they come up with a barely used code and they do mental gymnastics to make the arguement they need to.

Obviously I don’t know this as fact in this case, it just makes a lot more sense than just deciding after over a decade to finally sue Apple for what Apple CERTAINLY vetted as being legal.

Go and read about it, this has been discussed ad nauseam, seems like our American friends just don't get it.
I am not going to explain it, as I said, ....ad nauseam.

robjulo
Specifically what rules were changed and how did it cause Apple to retroactively pay more taxes?

Stop with this. They paid everything they were required to. EU *changes* the rules, and wants Apple to retroactively pay according to new rules. Would you?

Pay your taxes and shut up just like everyone else.

[URL unfurl="true"]https://www.iheart.com/content/2017-11-07-apple-blasts-tax-haven-story-claims-worlds-largest-taxpayer/[/URL]
Then read that one about how Apple is the the largest taxpayer in the entire world.

Lastly... rethink exactly who should shut up.
Rating: 6 Votes