Apple's chief privacy officer attended a discussion panel at the Consumer Electronics Show in Las Vegas on Tuesday to debate the state of consumer privacy, marking the first time in 28 years that Apple has been at CES in an official capacity. 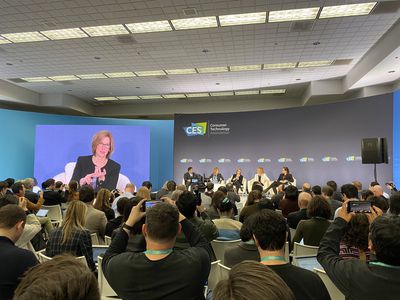 
"Our phones are relatively small and they get lost and stolen," Horvath said. "If we're going to be able to rely on our health data and finance data on our devices, we need to make sure that if you misplace that device, you're not losing your sensitive data."

Apple has held a consistent position regarding its use of encryption, even if that means it has limited ability to help law enforcement access data on devices involved in criminal investigations.

Just this week, the FBI asked Apple to help unlock two iPhones that investigators believe were owned by Mohammed Saeed Alshamrani, who carried out a mass shooting at a Naval Air Station in Florida last month. Apple said that it had already given the FBI all of the data in its possession.

Apple's response suggests it will maintain the same stance it took in 2016, when the FBI demanded that Apple provide a so-called "backdoor" into iPhones, following the December 2015 shooter incidents in San Bernardino. Apple refused, and the FBI eventually backed down after it found an alternate way to access the data on the iPhone.

Horvath took the same tack by saying that Apple has a team working around the clock to respond to requests from law enforcement, but that building backdoors into software to give law enforcement access to private data is something she doesn't support.

"Building backdoors into encryption is not the way we are going to solve those issues," Horvath said.

Horvath went on to talk up Apple's "privacy by design" technologies like differential privacy, user randomization in native apps and services, the on-device facial recognition in the Photos app, and minimal data retrieval for Siri. Horvath also confirmed that Apple scans for child sexual abuse content uploaded to iCloud. "We are utilizing some technologies to help screen for child sexual abuse material," she said.

DoctorTech
To every politician who "demands" a backdoor into electronic devices, I want to know who will go to jail when (not if) that backdoor is hacked by a criminal or misused by a government. I really don't care how "noble" your intentions are, if backdoors are built into electronic devices they WILL be abused and misused and if history teaches us anything, it is that NOBODY will be held responsible for the damage caused. To paraphrase PJ O'Rourke, installing a backdoor for the government is "like giving whiskey and car keys to a teenage boy, no matter how much they beg, no matter how much they promise they will be careful, don't do it."
Score: 27 Votes (Like | Disagree)

Kabeyun
In spite of some frustrations with the Apple ecosystem, their privacy positions are why I will never go anywhere else for the foreseeable future. Privacy is one of the defining issues of our time, and all of Apple’s other other good stuff is gravy.
Score: 22 Votes (Like | Disagree)

BigBoy2018
Having a secure phone is very important imo.

But, as has been said before, if you really care about privacy, quit sharing every damn stupid detail of your life on facebook etc.

People want all sorts of attention these days, as long as it's good.
Score: 7 Votes (Like | Disagree)

Sasparilla
Nice to see. The Government (investigative / hacking side) consistently tries to use cherry picked cases to get their back door's put into our smartphones. As we have seen previously with NSA zero day details (unofficial back doors), these have gotten leaked or hacked and put in the wild....there is no secure back door.
Score: 5 Votes (Like | Disagree)

Curious how Apple's "stance" doesn't apply in other countries like China. I guess it's not profitable to use privacy protection as a marketing tool there like it is here in the USA.

As expected. Apple has to follow the laws of the country they sell into. China has no privacy laws, no child protection laws, etc. If Apple is going to be allowed to sell into China they need to follow China's laws. Period.

Just don't corrupt the devices to be sold into the US so the the same device is sold in both countries.

Now if China's laws are not what they should be, then the people of China need to rise up and change them. It is not the responsibility of American's to attempt to change China's or any other country's laws.
Score: 5 Votes (Like | Disagree)

I'm VERY worried Apple is slowly going to become like BlackBerry did/has in terms of privacy and security, as they clinged onto that mythos so much innovation and progression to better products/services crawled to a halt!

Complaining that Apple doesn’t innovate is getting as worn around here as emoji and it-wrong jokes. Someone needs to explain to me how Apple is glaringly behind other smartphone manufacturers. And don’t bother with microSD or bezels; if that’s how y’all define innovation, and not A-series SOCs, W/H BT chips, FaceID, iPhone 11 Pro camera system (all with glowing reviews by impartial experts), etc. etc. etc., then I suggest you raise your bar. In this age, Apple’s privacy posture alone has been innovative. Want bending displays instead? LMAO!
Score: 5 Votes (Like | Disagree)
Read All Comments