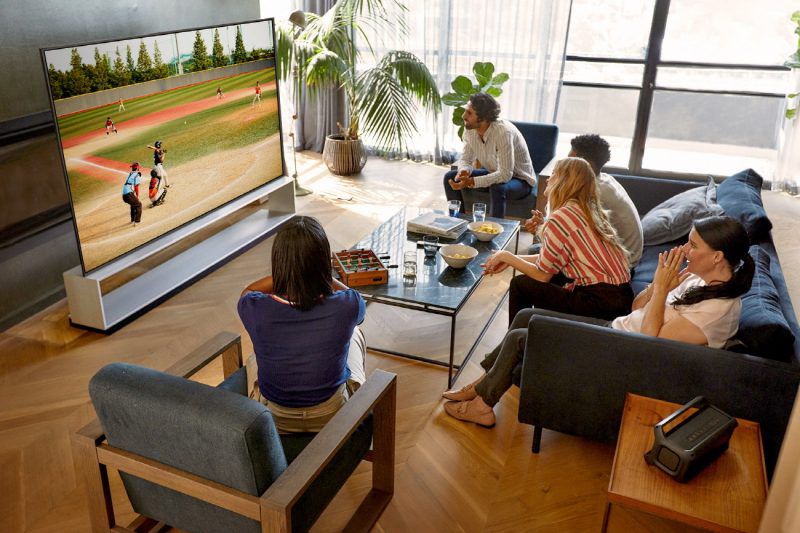 Most notably for Apple fans, LG says the new lineup of OLED TVs will include an Apple TV app, letting users access ‌Apple TV‌+, ‌Apple TV‌ channels, and iTunes video content. In addition to the new 2020 models, LG says the app will also be coming to 2019 and 2018 models later this year, although exact details on which models will be getting the app have yet to be shared.

New for 2020, the ‌Apple TV‌ app allows customers to subscribe and watch ‌Apple TV‌+ and ‌Apple TV‌ channels as well as access their iTunes video library and buy or rent more than 100,000 films and TV shows. Customers with 2018 and 2019 LG TV models will also be able to enjoy the ‌Apple TV‌ app this year.

While AirPlay 2 and HomeKit support have rolled out to a number of TV models from LG, Samsung, Sony, and Vizio, the ‌Apple TV‌ app has until now been exclusive to certain 2018 and 2019 Samsung models. The ‌Apple TV‌ app is also available on certain Roku and Amazon Fire TV devices, providing owners of non-Samsung TVs with some alternatives beyond the ‌Apple TV‌ set-top box, but native integration with ‌Apple TV‌ on additional TV brands will be a welcome addition.

npmacuser5
Not sold on smart TV’s. Rather TV manufactures put maximum smarts into the video, interfaces and leave the rest to sticks or boxes. So far not one of the TV OS has been impressive. Lag behind the sticks and boxes getting new and or updated features. More complexity for essentially no gain.
Rating: 6 Votes

WWPD
I wonder if this means the end is near for Apple TV hardware wise.

I hope not, I'm still waiting on the Apple TV stick.
Rating: 4 Votes

Side by side, the Apple TV version of the app starts up much faster and has fewer buffering issues than the same for Roku TV devices. I hope these LG models don't have similar performance discrepancies.

Yes, the Apple TV 4K has the beast of the A10X chip in it along with proper Apple OS so my opinion is that the Apple TV box from Apple will always give a far better user experience in terms of performance and reliability. Don't forget the Apple TV OS gets updated every 4 weeks or so and has the extremely important frame rate matching etc.
This will always outperform a smart TV app with its basic CPU/GPU etc.
Rating: 3 Votes

I wonder if this means the end is near for Apple TV hardware wise.

I hope not, I'm still waiting on the Apple TV stick.

Not sold on smart TV’s. Rather TV manufactures put maximum smarts into the video, interfaces and leave the rest to sticks or boxes. So far not one of the TV OS has been impressive. Lag behind the sticks and boxes getting new and or updated features. More complexity for essentially no gain.

Have a 2018 LG with ATV4K, and a 2019 Samsung with Airplay built in. Bar none, hands down, my wife and I prefer the Apple TV interface to using Airplay and/or the Apple TV app on the Samsung. Sure, we'd rather not have to deal with the delicate hatchling that is the ATV remote, but other than that, it's no contest; Apple TV is so much easier and less of a hassle to use than Airplay. So much so that we've considered just spending the money on another ATV for the Samsung. Which sucks, because the reason we bought it in the first place was to have built in Airplay and not have to deal with another device/remote. Oh well, lesson learned. Unsolicited advice given to anyone who happens to read this: save your money on a TV with Airplay built in. Get an Apple TV instead. Not even close on the advantages of an ATV. Edit: Totally agree with you that TV manufacturers should stay in their lane. Let Apple, Roku, Google, etc. design their UIs in the form of external sticks/boxes. Exactly the same thing with car manufacturers. My gosh, I wish car manufacturers would just stop. Stop burying temperature controls, audio controls, etc. in a freaking touch screen... Give us Carplay, Android Auto, and the screen either does one of those or the radio. That's it. Leave UI stuff to the folks who know it. Okay, end of rant. :)
Rating: 3 Votes

hope you got a long warranty, my oled has already been replaced due to burn in and now the replacement is starting to have issues after a year

* Using TV as computer monitor or kiosk
* Playing many hours of games a day with static elements (e.g., HUD)
* Watching the same TV channel many hours a day with network logo or scrolling banner (e.g., CNBC)

Beyond these and similar scenarios, it's extremely unlikely for modern OLED to be damaged with permanent burn in images.
Rating: 3 Votes

nutmac
This is a great move to include 2018 models.

While AirPlay 2 is a great bandage fix, webOS Apple TV would be far more useful. Judging by Apple TV app on other platforms (Amazon Fire TV, Roku, Samsung), it may only support HDR10 and stereo sound. And Apple TV app is limited to Apple TV+ and Apple TV Channels, sometimes iTunes purchases and rentals, and definitely no Home Sharing/Shared Libraries. It's good that LG version will support all Apple contents excluding Home Sharing/Shared Libraries.

I have an ATV4K, and my 55” C9 will arrive this week. And a new AVR - probably a Yamaha with lots of bells and whistles. Is it better to plug the ATV into the TV and send the audio to the AVR by eARC - or - ATV into the AVR and then the TV?

It doesn't matter if you're on the way to buy the whole set of TV and AVR because both will be compatible with current audio/video format. But I'd go with ATV (and any of your HDMI devices) --> Yamaha AVR --> LG OLED so you run one cable out to your TV, and also power cable. Way cleaner looking.
Rating: 2 Votes

DCstewieG
LG continues with non-existent support for TVs more than a couple years old. I can kind of but not really understand not adding HomeKit/AirPlay support, but an app? If I can get Netflix and Disney+ there’s no reason I shouldn’t be able to get the Apple TV app.

Bring on microLED because the only reason to buy LG is the top-notch quality of OLED.
Rating: 2 Votes

Anonymous Freak
Glad they're finally adding support to 2018 models, that annoyed me as the owner of a 2018 model...
Rating: 1 Votes

chewbaka
not sure why this is such a big deal. Aren’t most people buying $3,000 TVs also setting up surround sound with an AV receiver, in which case you’d want a top-set streaming device connected to the receiver for sound?
Rating: 1 Votes