Coinciding with the launch of its public bug bounty program, Apple today published its new Apple Platform Security guide, offering users details about the security technology and features that are implemented within Apple platforms – including sections on Mac for the first time. 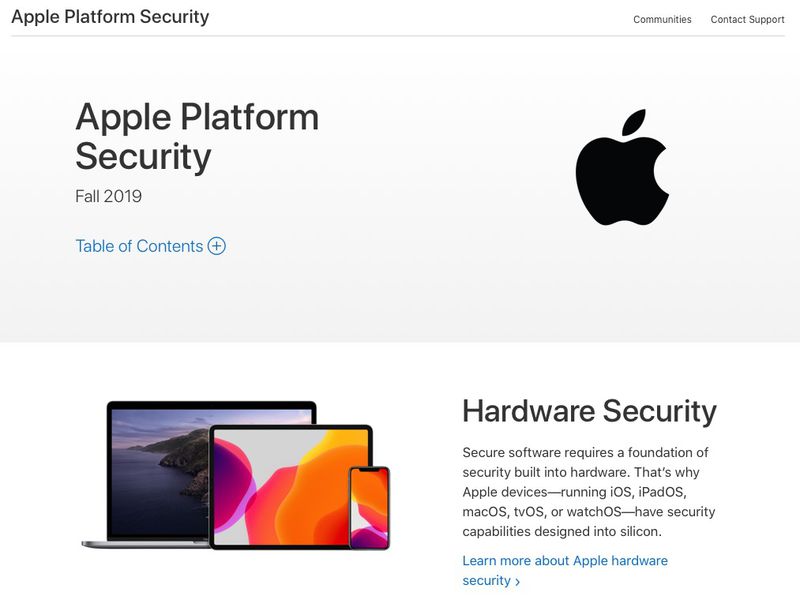 The documentation has been updated to reflect changes in iOS 13.3, iPadOS 13.3, macOS 10.15.2, tvOS 13.3, and watchOS 6.1.1. The Apple Platform Security site also covers hardware and services, providing comprehensive information in a readable format on the following topics:

The site can be browsed from the Table of Contents at the top of the page, or a PDF of the documentation can be downloaded here.

If users believe they have discovered a security or privacy vulnerability that affects Apple devices, software, services, or web servers, Apple encourages them to report it by sending an email to product-security@apple.com along with any relevant videos, crash logs, and system diagnosis reports. More information on reporting a security or privacy vulnerability can be found here.

Puppuccino
It's great that it exists, but clear communications from Apple regarding bugs need to be established. I don't expect a heartfelt letter of thanks when I submit bugs, but something more than them sitting in a list without any kind of status indication puts me off.

Apple is great at marketing but their 'PR' is non-existent.

They need to talk more.
Score: 2 Votes (Like | Disagree)

Not sure what this is, but PR is definitely the wrong word for it. Maybe Developer Relations?

I don't expect a heartfelt letter of thanks when I submit bugs, but something more than them sitting in a list without any kind of status indication puts me off.

I totally agree with this. I've reported two vulnerabilities to them in the past. Both times they credited me, but neither time did they acknowledge receipt of the bug, the vulnerability, that they had figured it out, or that they were going to fix it until just before the public release of the fix when they asked me how I wanted to be credited.

That was several weeks (months in one case) of stress worrying if I'd really got it in front of them in a way that they understood it.

Apple is great at marketing but their 'PR' is non-existent.

Not sure what this is, but PR is definitely the wrong word for it. Maybe Developer Relations?
Score: 1 Votes (Like | Disagree)

madmin
This is very welcome, but unfortunately is an exception to the usual lack of decent, up to date documentation coming from Apple in recent years.
Score: 1 Votes (Like | Disagree)


Without even blinking you want this topic to be Android/Windows vs iOS/macOS. I pity you.
Score: 1 Votes (Like | Disagree)
Read All Comments

Saturday March 28, 2020 9:56 am PDT by Hartley Charlton
iFixit today shared a video teardown of the new iPad Pro, which Apple unveiled earlier this month. iFixit found that most of the internals of the 2020 iPad Pro are the same as the 2018 model, confirming that the device is a relatively incremental update. The most notable new feature seen inside the new iPad Pro was the LiDAR scanner, which measures the distance to surrounding objects up...
Read Full Article • 160 comments

Monday March 30, 2020 2:40 am PDT by Tim Hardwick
Apple's 5G iPhone is still on track to launch within the company's typical annual fall release schedule, according to a new Bloomberg report on filed on Monday. Signs are that Apple's Chinese-centric manufacturing -- of which Hon Hai is the linchpin -- is slowly getting back on track. The next iPhones with 5G wireless capabilities remain on schedule to launch in the fall, partly because mass...
Read Full Article • 78 comments