Ultimate Rivals is a sports game franchise that brings athletes from hockey, basketball, football, and soccer into one video game, which Apple says is a first in sports gaming. 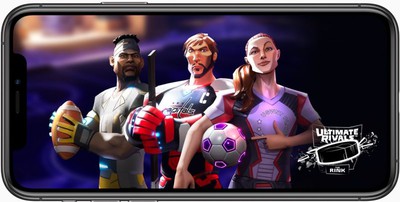 The first title in the franchise, "Ultimate Rivals: The Rink," allows players to choose from more than 50 athletes to compete in two-on-two hockey matches. There are licensed athletes from the NHL, NBA, NFL Players Association (NFLPA), MLB, WNBA and the US Women's National Soccer Team Players Association (USWNTPA), plus retired legends like Wayne Gretzky.


Different combinations of players will unlock unique ways to play and win against the AI or other gamers in online multiplayer matches. According to Apple, the game features 60 frames-per-second graphics, tight controls, leading-edge visuals, and sound design.

"With ‌Apple Arcade‌, we are committed to delivering a curated catalog where every title offers players a new, innovative experience that pushes the boundaries of what a game can be. The 'Ultimate Rivals' franchise does just that," said Phil Schiller, Apple's senior vice president of Worldwide Marketing. "'Ultimate Rivals: The Rink' is a great new addition to ‌Apple Arcade‌ and we are excited for everyone to try it out."

OriginalClone
I still haven’t seen anything worth paying $4.99 a month for..
Score: 11 Votes (Like | Disagree)

I still haven’t seen anything worth paying $4.99 a month for..

I know right? $5 is too much. I’d rather spend it on one coffee that lasts 12 minutes and play games with ads and in-app purchases.
Score: 6 Votes (Like | Disagree)

Good to see Apple getting people off their phones and outside playing sports. Is that right? :rolleyes:

Not exactly Apple's mission statement? Anyways the Apple Watch does a pretty good job at doing that.
Score: 5 Votes (Like | Disagree)

Good to see Apple getting people off their phones and outside playing sports. Is that right? :rolleyes:

Strange you're not complaining about Steam, Microsoft, Sony and Nintendo... Aren’t those platforms much more popular than Apple Arcade? They must be much more responsible for people sitting inside and playing games, instead of outside playing sports. Right?
Score: 4 Votes (Like | Disagree)

I know right? $5 is too much. I’d rather spend it on one coffee that lasts 12 minutes and play games with ads and in-app purchases.

Does that trigger you? There’s so many great games available for free or even a one time fee. Everything doesn’t need to be a subscription model.
Score: 3 Votes (Like | Disagree)

I still haven’t seen anything worth paying $4.99 a month for..