Ahead of the release of the Mac Pro and Pro Display XDR, Apple gave several of the machines to prominent tech YouTubers to test out, and their first impressions, overviews, and unboxings of the ‌Mac Pro‌ are now available. 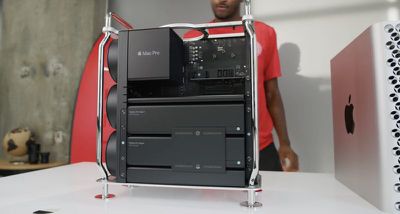 
iJustine focused on the new accessories that come with the ‌Mac Pro‌, including a black Magic Mouse, a black Magic Trackpad, and a black and silver Magic Keyboard.

iJustine also provided an interesting visual comparison between the old ‌Mac Pro‌ tower and the new ‌Mac Pro‌ machine, which have quite a few design similarities.


Morrison said that the Pro Display XDR with its nano coating technology is a "game changer," though you need to see the display in person to really appreciate it. He too highlighted the ‌Mac Pro‌'s quiet operation, saying that it was near silent even with "every core lit up."

The ‌Mac Pro‌ is "far beyond what most of us need" according to Morrison.

iJustine focused on the new accessories...

Wow she surely put that Mac Pro to good use! Can there even BE more useless Apple youtuber?
Score: 54 Votes (Like | Disagree)

Wow she surely put that Mac Pro to good use! Can there even BE more useless Apple youtuber?

Un, why did Apple seed iJustine a review unit?

jgbr
'popular youtubers'. Now lets wait for the people who actually know something and the true professional users rather than those making easy often sponsored $
Score: 22 Votes (Like | Disagree)

cypressc
I haven't watched iJustine's video yet, but let me guess what she says:

OMG IT"S, LIKE, SOOO COOOL. WOW WHAT AN AWESOME MAC!

Has she ever made an even slightly-negative comment about anything - ever?!