Samsung aims to usurp Apple's iPhone camera supremacy next year with a massive overhaul to the cameras on its flagship phones, reports Bloomberg. 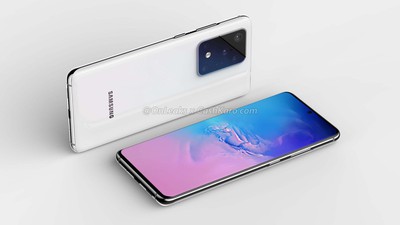 Its upcoming Galaxy S11 will sport a 108-megapixel sensor for the main camera -- versus the iPhone 11's 12 -- flanked by three more on the back of the device including an ultrawide-angle lens and 5x optical zoom, they said. The marquee device will also adopt a time-of-flight sensor for depth detection similar to one already in the Note 10+, a feature that can aid portrait photos and augmented-reality applications, the people said, asking not to be identified discussing specifications that haven’t been made public.

The high-resolution sensor and 5x zoom camera will also feature in its second Galaxy Fold device, which is expected to be unveiled in February, around the same time as the launch of the Galaxy S11 launch, according to Bloomberg. Affiliate Samsung Electro-Mechanics Co. developed the 5x zoom module, which went into production earlier this year.

The arsenal of lenses planned for the rear of the S11 are said to be a key part of Samsung's bid to outshine Apple in next year's smartphone stakes, with 5G connectivity and foldable devices forming the other core pillars of its head-start hardware strategy. Apple's next generation of flagship smartphones aren't expected to arrive until several months later in the fall.

Apple made major changes to the rear camera system in the 2019 ‌iPhone‌ lineup with the new triple-lens setup of the iPhone 11 Pro and Pro Max, and 2020 is expected to bring even more camera improvements.

The camera is said to be able to scan areas up to 15 feet from the device. Apple's front-facing TrueDepth camera uses similar 3D technology but because it's infrared and not laser-powered, it only works at distances of 25 to 50 centimeters.

Apple plans to release an all-OLED lineup in 2020 consisting of 5.4-inch, two 6.1-inch, and 6.7-inch models in the second half of the year, according to the latest prediction from analyst Ming-Chi Kuo.

nickawhite
Might as well just get it over with and make the bump the same length and width as the entire phone now.
Score: 14 Votes (Like | Disagree)

UltimaKilo
The camera as a main feature upgrade of a phone at this point is... boring.
Score: 9 Votes (Like | Disagree)

Liquid Galaxy
The unfortunate thing is that my purchasing decisions are only 10 or 20 percent swayed by hardware. Does the phone run iOS? No. Well then, there’s nothing left to say.
Score: 8 Votes (Like | Disagree)

miniroll32
Haha, reverting back to the megapixel wars.

The sad part is some people will actually believe 108 megapixels makes the sensor 108 times better.
Score: 6 Votes (Like | Disagree)

Piggie
All I will say is that we should all consider ourselves lucky that we have multiple companies trying to push forward and create better products (camera's) for us, the customers.
Whoever does it, you should be happy.
If someone comes up with something that works better than what we already have and is successful due to it, then this will be copied in some way by other companies raising the standard for everyone to enjoy.
Just think how bad phones would be today, if only 1 company made them with no competition.

I look forward to all improvements, and so should we all. :)
Score: 4 Votes (Like | Disagree)

I know you’re right and I’m in the minority, but I actually print out, give away, and display about .5-1% of my pictures, which is quite a few. I switched my from a digital camera to my iPhone, purely for convenience, and I have definitely felt the difference, but they’re doing better and better.

But Samsung means android, and I’m in too deep.

Saturday July 11, 2020 1:42 pm PDT by Arnold Kim
Casual MacRumors visitors may not realize that we have a very active PowerPC forum where users discuss issues related to PowerPC Macs that have not been produced since 2006. Threads range from hardware upgrades and software options to nostalgia: Photo by AphoticD Apple's recently announced transition to Apple Silicon (Arm) based Macs raised some interesting questions about future support...
Read Full Article • 100 comments

Friday July 10, 2020 3:33 am PDT by Tim Hardwick
Apple TV+ today debuted "Greyhound," the highly anticipated Second World War movie starring Tom Hanks as a naval officer given command of Navy destroyer Greyhound in the Battle of the Atlantic. "Greyhound" features Hanks as George Krause, who must fight his own self doubts and personal demons as he leads a convoy of Allied ships against German U-boats to prove that he belongs in command. ...
Read Full Article • 66 comments