Apple News+ Offering Three-Month Free Trial in U.S. and Canada This Weekend Only

Friday November 29, 2019 11:56 am PST by Joe Rossignol
Apple today started offering an extended three-month free trial period for Apple News+ to first-time subscribers in the United States and Canada, up from a one-month trial previously. According to the App Store, this is a temporary promotion available for the Black Friday and Cyber Monday weekend only. 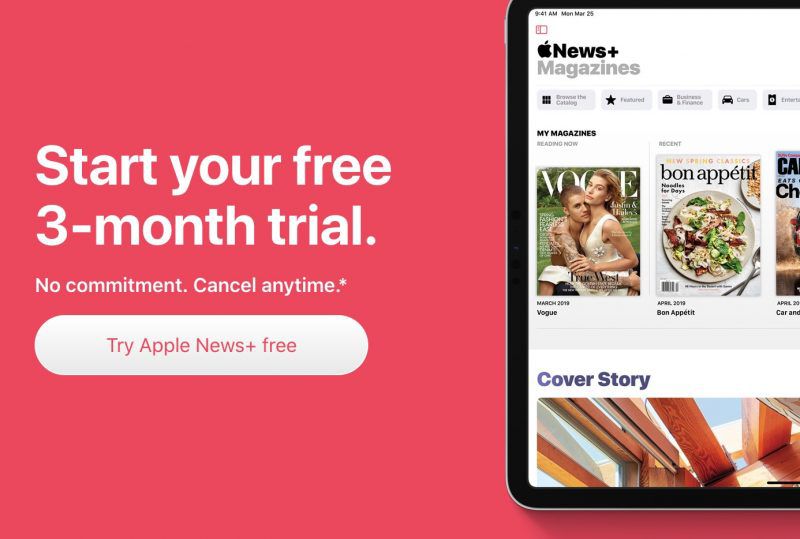 "This weekend only, get a 3 month free trial of Apple News+ and enjoy full access to hundreds of magazines and leading newspapers," says Apple.

Apple News+ is a subscription-based service in the Apple News app that lets you access hundreds of magazines and paywalled content from some news sites. The service launched in March following Apple's acquisition of Texture.

Apple News+ continues to offer a one-month trial in Australia and the United Kingdom.

now i see it
at this point they could give away a 1 year trial & it wouldn't make any difference
Rating: 65 Votes

HappyDude20
I’ve been using Apple News Plus for a while now and honestly it’s not that great.
The only real appeal is that I have access to dozens and dozens of magazines and newspapers, but navigating to what I want to read and discover is so annoying and not fun that I wouldn’t mind paying extra to have a real newspaper or magazine in my hand.
Rating: 23 Votes

ghostface147
That's still a hard no from me.
Rating: 23 Votes

Free trials like these, the company hopes that people will forget to cancel their free trial and start paying after the free period is over.
Rating: 23 Votes

WannaGoMac
How much for them to stop spamming News with News+ ads all over the app?
Rating: 15 Votes

How much for them to stop spamming News with News+ ads all over the app?

Tried it early on. I guess I'm not much of a magazine reader. I don't need the fluffy crap and hard "news" no longer exists, so what's the point (other than the publishers trying to make money for nothing)?

Apple has horribly misunderstood what they bought when they bought out Texture. News+ is an idiotic name for a magazine service. You're 100% right about the news magazines in the service, but 95% of the magazines are special interest, hobby, niche things and many of them really are excellent because they're produced by enthusiasts in the niche fields. But almost nobody gets that, which is perfectly understandable when it's called News+ and half-ass glued onto Apple's news aggregator.

Magazines in the 21st century have nothing at all to do with news. Even if the news quality were excellent, which it most certainly isn't, a weekly magazine is still pushing week-old news that nobody cares to read anymore. Apple doesn't understand that and all Apple has done here is confuse people.
Rating: 11 Votes

nostresshere
If any of the major news organizations would PUBLICLY PROMISE to report just the news and not opinion and click bait - I would pay $10 a month. Nobody from CNN to NBC to FOXNEWS (and most others) are reliable to get factual reporting anymore.

NOTE: Opinion pages are fine by the way - like they were once upon a time.

Note #2 - You will note that I am not being political as I slammed both sides of the news cycle above.
[automerge]1575061652[/automerge]
But - I just signed up for trial and put a not on my calendar to cancel at the end of Feb.
Rating: 10 Votes