In addition to breaking ground on a new $1 billion campus in Austin, Texas, Apple today announced that its new Mac Pro is now in production at a nearby facility in the city. The computer is set to launch in December. 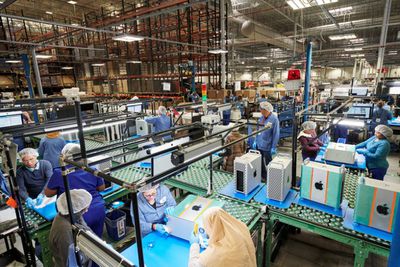 It is possible that Apple plans to assemble the Mac Pro in China for orders placed outside of the Americas, but the company has not commented.

Apple and its manufacturing partners have invested over $200 million in the Mac Pro facility in Austin. The manufacturing plant is UL Zero Waste to Landfill Gold certified, and has been recognized by Austin Water for Excellence in Water Conservation and Excellence in Environmental Stewardship.

In a press release, Apple CEO Tim Cook said "building the Mac Pro, Apple's most powerful device ever, in Austin is both a point of pride and a testament to the enduring power of American ingenuity."

The new Mac Pro will be the fastest Mac ever, with up to 28-core Intel Xeon processors, up to 1.5TB of ECC RAM, up to 8TB of SSD storage, and up to AMD Radeon Pro Vega II Duo graphics with 64GB of HBM2 memory. The computer also has eight PCIe expansion slots for maximum performance, expansion, and configurability.

Apple has yet to announce a specific release date for the new Mac Pro in December. Pricing will start at $5,999.

gazwas
So customers in the rest if the world have their Mac Pro built with cheap labour in China thus subsidising the overly expensive plant in Texas just so apple can tell US customers “it’s assembled in the USA”. :mad:
Score: 20 Votes (Like | Disagree)

Tastannin
Is it me or is the plant using iMacs hung upside down as some sort of information display at various stations?

ElectricPotato
For the asked price you should get to visit the plant and see your individual machine being built as they feed you Torchy's Tacos.
Score: 10 Votes (Like | Disagree)

JustinCymbal
I'm very happy that the new Mac Pro is being assembled in US..

I currently have an iMac that I bought in 2014 so I'm looking to buy a new iMac Pro in a couple years...

thisisnotmyname
What a beautiful image :-D

edit to add: they didn't just start production, it's been happening for over a month

edit to also add: Flex may have sunk $200M into that facility over the years but no one spent that specifically for the production of the 2019 Mac Pro at that location. More takes place there than building the Mac Pro
Score: 8 Votes (Like | Disagree)

shuto
you can download the full res image from apple's press page.

wonder if this is a glimpse of the Mac Pro's packaging...