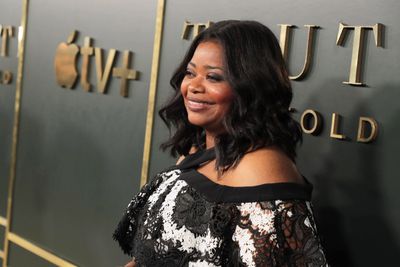 Octavia Spencer
Set to debut on Apple TV+ next month, the show stars Octavia Spencer in the role of Poppy Parnell, a podcaster who aims to reopen a murder case that she was involved in solving 18 years earlier that put Warren Cave (played by Aaron Paul) behind bars.

Spencer's character is unsure if she made a mistake when she helped put Paul's character (Warren Cave) in prison, and with her podcast, she tries to discover the truth and determine whether Cave was wrongfully convicted.

Based on the novel by Kathleen Barber, "Truth Be Told" is said to offer a unique glimpse into America's obsession with true crime podcasts and challenges its viewers to consider the consequences when the pursuit of justice is placed on a public stage.

Beginning December 6, the first three episodes of "Truth Be Told" will be available to watch on ‌Apple TV+‌ in over 100 countries and regions around the world, with new episodes rolling out weekly, every Friday. You can watch the trailer for the series here.

‌Apple TV+‌ costs $4.99 per month with a family of six able to watch for that price point. Apple is also providing customers who purchase an Apple TV, Mac, iPad, or iPhone with a free one-year subscription.

Shearwater
I was yawning as I read the article!o_O
Score: 12 Votes (Like | Disagree)

icanhazapple
Starting to wonder if Apple will pull out of this entire venture if every show is a dud.
Score: 11 Votes (Like | Disagree)

cardfan
No wonder the person in charge of scripted shows left Apple. This wasn’t rocket science. And yet...
Score: 10 Votes (Like | Disagree)

iapplelove
I couldn’t get through the trailer
Score: 9 Votes (Like | Disagree)

Lesser Evets
These shows... are difficult to be enthused about.
Score: 8 Votes (Like | Disagree)

I was yawning as I read the article!o_O

Thankfully you managed to stay awake long enough to regale us with your tale! ;)

I'll be keeping an eye on this show. Looks promising ?
Score: 8 Votes (Like | Disagree)
Read All Comments