"See" director Francis Lawrence, who also directed the "Hunger Games" movies, recently sat down for an interview with Business Insider where he shared some details on the filming of "See" and the research that went into the show.

According to Lawrence, rumors that "See" cost $240 million for two seasons were incorrect. "See" is "an expensive show," said Lawrence, but that budget "got blown out of proportion." It's nowhere near the scale of other big shows like "Game of Thrones." 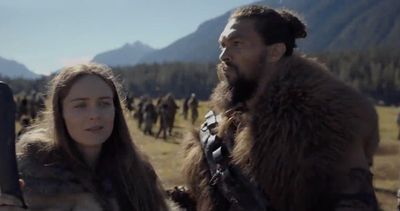 When filming "See," Lawrence had a "think tank" with blind consultants, an evolutionary biologist, and a survivalist to brainstorm ideas. "See," for those unfamiliar with the show, is set in a post-apocalyptic timeline where most of the world was wiped out by a virus, and those who were left were rendered blind.

How long after civilization had vanished does the story take place and what would things look like and what would remain? We built out a blindness bootcamp with our consultants and [figured out] how that crosses over with our art and props department. What do the huts [in the village] look like? How are people navigating?

The actors in the show are made to look blind using special effects rather than contacts, as Lawrence said that it was impractical to use contacts for so many people due to the risk of cornea issues and the cost of hiring optometrists.

Primarily the cast can see. Some of our main tribe, like Bree Klauser and Marilee Talkington, in the first couple episodes are both low-vis. Some of the actors in the Queen's court are blind. We tried to find as many blind and low-vis actors as we could. The goal would be to improve upon that in the next season.

Much of the show was filmed out in the wilderness and "pretty far from any cities," which made it difficult. The battle in episode one, for example, took four days to film because it involved a lot of people and a lot of stunts.

"See" has a rather surprising introductory scene introducing Queen Kane, who is the queen of the region, which Lawrence also commented on. When he saw that part of the script, he said, he "loved it."

The blindness idea fed into every [creative] choice we made. To connect spirituality with the senses and euphoria and pleasure in that way was really interesting. I also loved when I watched the episode the feeling of getting to the Queen and discovering a new facet of the world. Two-thirds of the way through the [first] episode, you kind of feel like you know the kind of show you're [watching]. Lou Reed is playing on a record player. It opens up the show tonally.

Lawrence's full interview, which goes into even more detail on filming, can be read over on Business Insider. "See," which stars Jason Momoa and Alfre Woodard, is available on Apple TV+ now.

rmoliv
I wonder what kind of consultants those were. It doesn't make sense that in a society that has been blind for centuries people still match colors in their clothes, or use feathers on their heads as ornaments, and so many other details... Worst attempt at science-fiction ever!
Score: 27 Votes (Like | Disagree)

JamieLannister
This tv show sucks bad. But then again my sister's death scene was just as bad.
Score: 23 Votes (Like | Disagree)

I can’t even believe Apple is getting into content. They’re a tech company. And they would do much better to focus on that. Steve always talked about how they had such a focused, small number of high quality products. Fix your bugs Apple

You do realise they hired a bunch of people to handle tehe content side of things?

Craig Federighi isn’t spending his weekends doing an edit of For All Mankind.

Please tell me you get this, I’d be terrified to think you’d be this silly.

I wonder what kind of consultants those were. It doesn't make sense that in a society that has been blind for centuries people still match colors in their clothes, or use feathers on their heads as ornaments, and so many other details... Worst attempt at science-fiction ever!

If all the cloth is sourced from the same place, then multiple garments will be the same colour. And feathers work for textural and aural affectation. Use your imagination, that’s what the show runners did.

I wonder which one of those suggested that they include a mystic who touches herself while reciting a bastardized version of the Lord's Prayer that has no relevance to the story whatsoever.

How do you know it has no relevance, they’ve not expanded on the history of this world much yet.
Score: 16 Votes (Like | Disagree)

miniyou64
I can’t even believe Apple is getting into content. They’re a tech company. And they would do much better to focus on that. Steve always talked about how they had such a focused, small number of high quality products. Fix your bugs Apple
Score: 16 Votes (Like | Disagree)

Does that make it gooder? Not one of the “shows” AppleTV+ are appealing to me.

You can judge for yourself if you watch the show. I enjoyed it and am looking forward to the next episode.
Score: 15 Votes (Like | Disagree)

confessJason
The next consultant should be someone who knows how to write a compelling story.
Score: 13 Votes (Like | Disagree)
Read All Comments